We now further examine the diﬀuse attenuation functions, which are often called ”K functions.” Under typical oceanic conditions, for which the incident lighting is provided by the sun and sky, the various radiances and irradiances all decrease approximately exponentially with depth in homogeneous water, when far enough below the surface (and far enough above the bottom, in optically shallow water) to be free of boundary eﬀects. It is therefore convenient to write the depth dependence of , for example, as

where is the diﬀuse attenuation function for spectral downwelling plane irradiance. Solving for gives the equation previously used for the deﬁnition of :

Similar equations can be written for other radiometric variables and their corresponding K functions.

As explained in the previous discussion of AOPs, in order to be useful for relating light measurements to water properties, the K functions should depend strongly on water IOPs but only weakly on external environmental conditions like sun location, sky condition, or surface waves. To illustrate these dependencies, various K functions were numerically computed using the HydroLight radiative transfer numerical model. In most situations it is preferable to work with real data. However, use of this model gives us the ability to simulate diﬀerent environmental conditions at will and to control things that cannot be controlled in nature, such as turning chlorophyll ﬂuorescence on or oﬀ. This can be very useful for understanding the interdependence of various quantities.

HydroLight simulations were ﬁrst performed at one wavelength for homogeneous idealized water bodies dominated by either scattering or absorption. For the ”highly scattering” water, the absorption coeﬃcient was set to , and the scattering coeﬃcient was , so that the albedo of single scattering was . These values correspond roughly to what might be found in Case 1 water with a chlorophyll concentration of at blue or green wavelengths. An ”average particle” scattering phase function was used, the sun was placed in a clear sky, and the water was inﬁnitely deep. Note that since , the optical depth is numerically equal to the geometric depth z in meters. 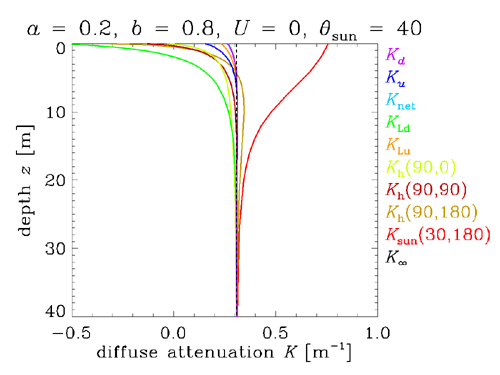 Figure 1: Fig 1. Computed K functions for ”highly scattering” water. The sun was at a zenith angle of 40 deg and the sea surface was level. The optical depth is numerically equal to the geometric depth.

There are several important features to note in Fig. 1:

Figure 2 shows the K functions corresponding to the same conditions as Fig. 1, except that the wind speed was . We see that there is very little diﬀerence between Figs. 1 and 2. Thus, as hoped, the K functions are almost unaﬀected by the surface waves. 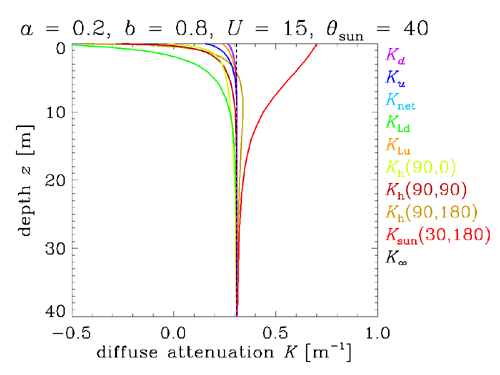 Figure 2: Fig 2. Computed K functions for ”highly scattering” water. The conditions were the same as for Fig. 1, except that the wind speed was , so that the sea surface was not level. 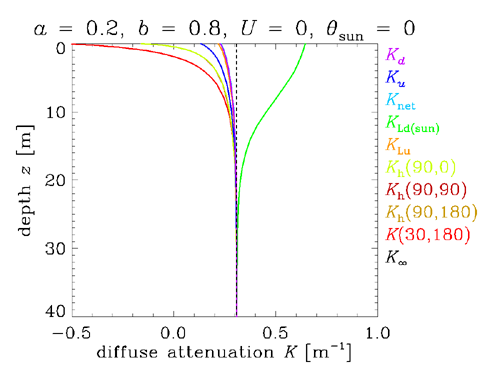 Figure 3: Fig 3. Computed K functions for ”highly scattering” water. The conditions were the same as for Fig. 1, except that the sun was at the zenith.

Figure 4 shows K functions for ”highly absorbing” water: the absorption coeﬃcient was , and the scattering coeﬃcient was , so that the albedo of single scattering was . These values correspond roughly to what might be found at red wavelengths, where absorption by the water itself begins to dominate the IOPs. Other conditions were the same as for Fig. 1. 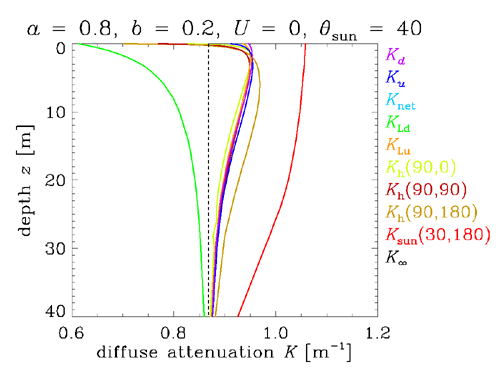 Figure 4: Fig 4. Computed K functions for ”highly scattering” water. The sun was at a zenith angle of 40 deg and the sea surface was level. The optical depth is numerically equal to the geometric depth.

Comparing Figs. 1 and 4, we note that

Comparing Figs. 1 and 4 also shows that the K’s have changed greatly because of the change in IOPs, which is what is desired in any AOP. For the highly absorbing water, .

The distinction between beam and diﬀuse attenuation is important. The beam attenuation coeﬃcient c is deﬁned in terms of the radiant power lost from a collimated beam of photons. The downwelling diﬀuse attenuation function , for example, is deﬁned in terms of the decrease with depth of the ambient downwelling irradiance , which comprises photons heading in all downward directions (a diﬀuse, or uncollimated, radiance distribution). In the above simulations, at all depths, but all K functions except the near-surface in the high absorption case are less than c. Radiative transfer theory shows (e.g., Light and Water (1994) Eq. 5.71), for example, that in general , where is the mean cosine of the downwelling radiance. These inequalities are seen to hold true in the above simulations.

HydroLight was next used to simulate a homogeneous Case 1 water body with a chlorophyll concentration of . As for Figs. 1 and 4, the sun was at 40 deg and the surface was level. Figure 5 plots several quantities as a function of wavelength at 10 m depth for this simulation. We see that between 300 and about 600 nm, the various functions are very similar and proportional to the total (including water) absorption coeﬃcient . However, beyond 600 nm the K functions diﬀer from each other, and they are all much diﬀerent from a. The reason for this behavior is inelastic scattering. 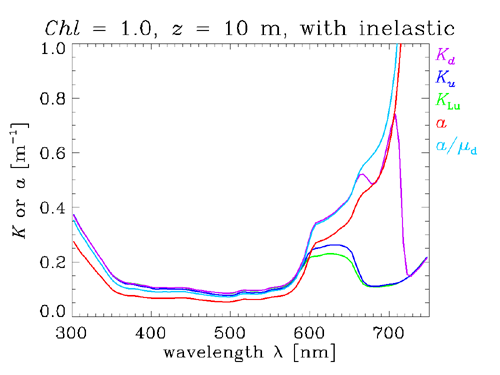 Figure 5: Fig. 5. K at 10 m depth for Case 1 water with . The HydroLight run included Raman scatter by the water, and chlorophyll and CDOM ﬂuorescence.

At the near-UV to blue to green wavelengths below 600 nm, most of the radiance at 10 m depth (for these IOPs) comes from sunlight being transmitted through the upper 10 m of the water column. Above about 600 nm, absorption by the water itself has removed most of the sunlight. For example, at 700 nm where , we expect roughly of the surface light to reach 10 m. However, Raman scatter and CDOM ﬂuorescence inelastically scatter light from shorter wavelengths, where sunlight is present, into the red wavelengths, and thus create additional red light at 10 m. Thus, beyond 600 nm, the various radiances and irradiances no longer decrease with depth in the simple exponential fashion expected. Note that tracks a longer than do and . This is because continues to collect whatever downwelling sunlight remains, and thus the inelastic contribution to is not noticeable until the chlorophyll ﬂuorescence contribution begins near 670 nm. and on the other hand have only a small amount of backscattered sunlight, so that the inelastic contribution becomes signiﬁcant sooner, at around 600 nm.

It is easy to verify that the peculiar behavior of the K functions beyond 600 nm is due to inelastic scatter. The HydroLight run was repeated with Raman scatter and CDOM and chlorophyll ﬂuorescence ”turned oﬀ.” Figure 6 shows the results. Now, the K functions all track the absorption nicely at all wavelengths. 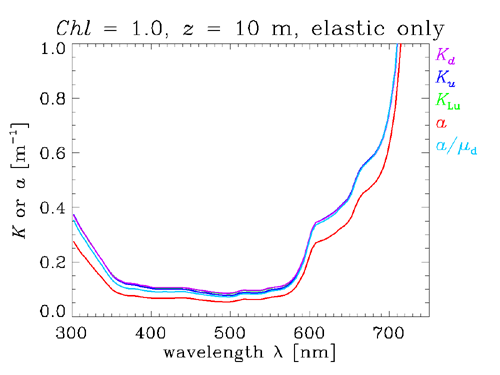 Figure 6: Fig. 6. K at 10 m depth for Case 1 water with as in Fig. 5, except that inelastic scatter was turned oﬀ in the HydroLight run.

As seen in these ﬁgures, radiative transfer theory shows that K functions are very ”absorption like,” meaning that the K functions are strongly correlated with the total absorption coeﬃcient when inelastic scatter eﬀects are negligible. For , the approximate relation gives close agreement between the exact (computed by HydroLight) and the value estimated from the absorption coeﬃcient and the downwelling mean cosine of the radiance distribution, which was also obtained from the HydroLight simulation.

These few simulations are enough to establish the salient features of diﬀuse attenuation functions. Their use has a venerable history in optical oceanography. Smith and Baker (1978) listed some of their virtues:

Gordon (1989) developed a simple way to normalize measured values. His normalization for all practical purposes removes the eﬀects of the sea state and incident sky radiance distribution from , so that the normalized can be regarded as an IOP. The theory behind the normalization is given in his paper; the mechanics of the normalizing process are as follows.

Here t(sun) and t(sky) are respectively the fractions of the direct beam and of the diﬀuse irradiance transmitted through the surface; these quantities can be computed using methods described in Light and Water (1994) Chapter 4 [where they are denoted by t(a,w)]. However, if the solar zenith angle in air, , is less than 45 degrees , then . If the sky radiance distribution is nearly uniform (as it is for a clear sky), then . In this case, we can accurately estimate f from measurements made just above the sea surface:

The sun and sky irradiances are easily obtained from an instrument on the deck of a ship. When both direct and diﬀuse light fall onto the instrument, it records . When the direct solar beam is blocked, the instrument records . (Advanced technology is not required here: just hold your hat so that its shadow falls on the instrument.)

Next compute the nadir angle of the transmitted solar beam in water, , using Snell’s law:

This value of is valid for ﬂat or rough sea surfaces as long as . For larger values of , or for an overcast sky, a correction must be applied to to account for surface wave eﬀects on the transmitted light; the correction factors are given in Gordon (1989, his Fig. 6). Gordon’s normalization then consists simply of dividing the measured by :

Physically, is a function (essentially ) that reduces values to the values that would be measured if the sun were at the zenith, if the sea surface were level, and if the sky were black (i.e., if there were no atmosphere). The zenith-sun, level-surface, black-sky case is the only physical situation for which . In other words, normalization by removes the inﬂuence of incident lighting and sea state on . The same normalization can be applied to depth-averaged values of .

We recommend that experimentalists routinely make the simple measurements necessary to determine , because normalization of enhances its value in the recovery of IOP’s from irradiance measurements.