In this chapter we will focus on the Absorption Coeﬃcients of the oceanic consituents deﬁned in Chapter 4. The Constituents that comprise the optically important components to total absorption in the ocean are:

In each case we can deﬁne a typical spectrum and the typical range of spectral variations that are typically encountered.

The absorption by pure water in the visible region of the spectrum is low in the blue and increases into the UV, red and infrared with visible harmonics associated with state transitions (Fig. 1). There are large variations in the measurement of pure water absorption coeﬃcients, with the largest variations in the blue region of the spectrum, likely due to contamination by organic matter. 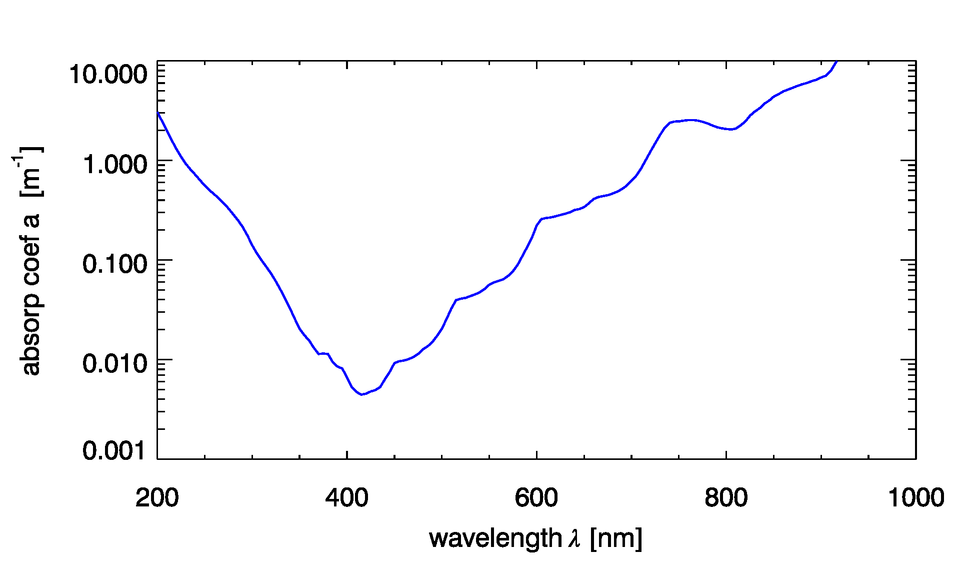 The absorption coeﬃcients in the near IR spectral regions associated with harmonic features exhibit signiﬁcant variations with water temperature (Fig. 2) and to a lesser degree, salinity. These variations are important to quantify and account for when (1) modeling total in situ absorption, (2) applying calibration coeﬃcients to ac meters, (3) measuring absorption spectra spectrophotometrically in cuvettes relative to a pure water blank. 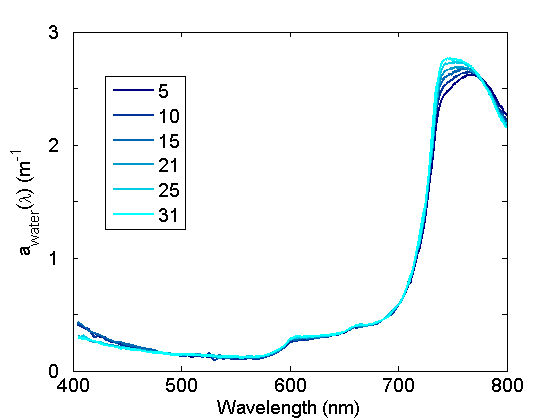 Figure 2: Fig. 2. Variations in pure water absorption spectrum as a function of water temperature (data from Pegau and Zaneveld 1993).

Phytoplankton absorption is determined by the composition and concentration of pigments (Table 1).

Pigments have unique absorption spectra which lend a range of colors to phytoplankton (Fig. 4A) and a range of spectral shapes to the respective absorption coeﬃcients (Figure 1B). The major groups of pigments are the chlorophylls, the carotenoids and the phycobilipigments. 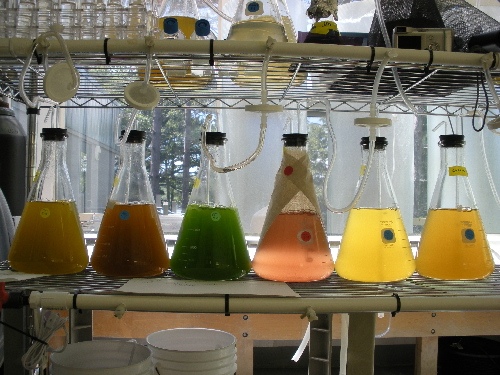 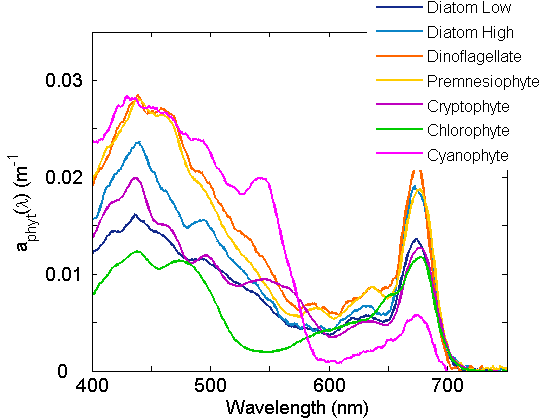 Figure 4: Fig. 4.B Example of absorption spectra for a range of monospeciﬁc cultures in part A. Note the diﬀerence in the absorption coeﬃcients of diatoms grown in high light compared to those grown in low light.

Given that each pigment has a unique spectrum and each species of phytoplankton has a characteristic pigment complement, the absorption for that species can be reconstructed from the sum of the individual pigment absorption spectra (Figure 2). Variations within the species are observed as pigment ratios vary. Acclimation to varying growth irradiance is primarily responsible for variation in cellular pigment concentration and pigment ratios, with higher cellular pigment concentration and varying accessory pigment to chl a ratios observed for cells acclimated to low light (Figure 3).

The non-algal particle component, NAP, is deﬁned operationally as the particulate material that is not extracted by methanol (Kishino et al. 1985) in the spectrophotometric measurement of particles on ﬁlter pads. Thus it is a composite of living organic particles such as bacteria, other protists, zooplankon, detrital organic matter, and suspended inorganic particles (lithogenics). Although widely variable in composition, the absorption spectrum is relatively invariant, highest in the blue-uv portion of the spectrum, decaying approximately exponentially to the red (Figure 1).

Often an exponential function is ﬁt to the absorption spectrum and the slope is estimated by non-linear regression:

A. Probability distribution of spectral slopes for NAP absorption from the European coastal waters and B. resulting variations in the absorption spectra (Babin et al. 2003).

The contribution to NAP by non-organic particles is particularly important near rivers and in benthic boundary layers. Absorption spectra measured by lithogenic samples indicate a similar absorption spectral shape with some features in the visible, particularly associated with high iron content (Figure XE; Babin and Stramski 2001).

CDOM is deﬁned operationally as the material that passes through a ﬁlter of nominal pore size 0.2 mm (Bricaud et al. 1981) or 0.7 mm if spectrophotometric closure is to be achieved (Simeon et al. 2003). This fraction includes organic substances as well as inorganic salts, both of which exhibit absorption peaks in the ultraviolet portion of the spectrum (Figure). The visible portion of the spectrum is dominated by the organic fraction and thus the term CDOM is used. The absorption in the visible decays approximately exponentially to the red (Figure), and an exponential function is ﬁt to the absorption spectrum and the slope is estimated by non-linear regression:

A. Probability distribution of spectral slopes for CDOM absorption from the European coastal waters and B. resulting variations in the absorption spectra (Babin et al. 2003).

The spectral slope has been shown to be an indicator of organic matter composition (Figure 2; Carder et al. 1989)with fulvic terrestrial material having steeper spectral slopes than marine-derived humic material.

Variations in spectral slope have also been associated with size fractions of CDOM (i.e. 0.2m and 0.2m to 0.7m) and qualitatively an indicator of refractory vs labile organic matter (Figure 3; Simeon et al. 2001).

Distribution of CDOM absorption coeﬃcients at 440nm along the equator in the Paciﬁc for two size fractions, 0.02 mm found in deep upwelling waters and 0.2 mm to 0.7 mm colloidal fraction found in the surface waters associated with phytoplankton blooms. The spectral slope of the two fractions was 0.02 nm-1 for the old refractory material and 0.011 nm-1 for the new labile material, respectively. From Simeon et al. 2003.

Comments for Absorption by Oceanic Constituents: