We now take into account the angular distribution of the scattered power, with two assumptions. We ﬁrst assume that the medium is isotropic, i.e., its inﬂuence on light is the same in all directions at a given point. This is a reasonable assumption for natural waters in which the particles are randomly oriented by turbulence. We also assume that the incident light is unpolarized. If these two assumptions are true, then the scattering process is azimuthally symmetric. This means that the scattering depends only on the scattering angle , which is measured from the direction of the unscattered beam as shown in Fig. 1. Clearly 0 . 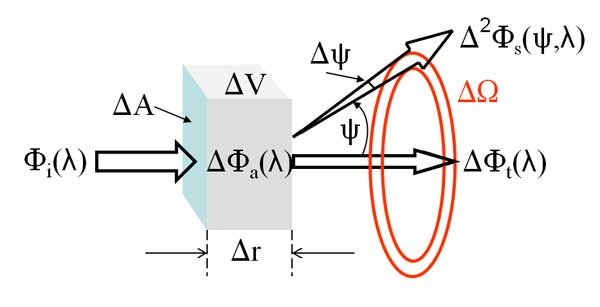 Figure 1: Geometry used to deﬁne the volume scattering function. is the incident power onto an area . An amount of the incident power is absorbed in distance , and is the power scattered into the annular ring of solid angle . is the transmitted power.

With these two assumptions, the fraction of incident power scattered out of the beam through an angle into a solid angle centered on , is . The notation is adopted from ? to indicate that is a second-order small quantity, that is, it is small because both and are small. The solid angle now includes all directions within the two red rings shown in the ﬁgure, corresponding to all directions between scattering angles and . The volume scattering function is deﬁned as the limit of this fraction as and :

The forms of Eqs. (1) and (2) involving partial derivatives are conceptual deﬁnitions. Instruments that measure the VSF always have to deal with ﬁnite path lengths and ﬁnite solid angles . The transition from a deﬁnition as a derivative to an instrument design is discussed on Sec. ?? on measuring IOPs.

The volume scattering phase function1 , , is deﬁned by

The asymmetry parameter is a convenient measure of the “shape” of the phase function. For example, if is very large for small , then is near one. If is symmetric about = 90 degrees , then . Typical ocean waters have values in the range of 0.8 to 0.95.

Comment: We have assumed above that the scattering is azimuthally symmetric, so that the directional pattern or angular shape of the VSF depends only on the scattering angle . This is not the case for polarized incident light, even if the medium is isotropic. Thus a linearly polarized laser beam will scatter diﬀerently for diﬀerent azimuthal directions (measured relative to the plane of polarization), even if the medium is isotropic. Description of polarized light requires the Stokes vector formalism and a more complicated description of scattering by polarized light; also see The General Vector RTE.

If the medium contains non-spherical particles that are not randomly oriented, even unpolarized light will scatter diﬀerently for diﬀerent azimuthal directions. This is sometimes the case, for example, in cirrus clouds and ice fogs, which can have non-spherical ice crystals that become oriented in a particular way as the crystals fall through a calm atmosphere. The atmosphere is then an optically anisotropic medium, and scattering is not azimuthally symmetric. Scattering of sunlight in such an atmosphere gives rise to phenomena such as “sun dogs” or parhelia, which are bright spots to either side of the sun.