Light from the Sun

This section brieﬂy surveys how light is produced by the Sun, and characterizes the sunlight reaching the Earth.

Since most of the light falling upon the earth originates in the Sun, it is worthwhile to start with a brief look at how this light is generated deep within the Sun in a process known as the proton-proton cycle. The core of the Sun is primarily a mixture of completely ionized hydrogen and helium. At the center the temperature is approximately , and the density is about 150 times that of water. Under these extreme conditions the hydrogen nuclei, or protons, occasionally collide with suﬃcient energy to overcome their electrostatic repulsion and fuse together according to the reaction

This reaction releases energy, which is carried oﬀ by the created particles. The bound state of a proton and a neutron, indicated by the {...} is called a deuteron. The positron is identical to an electron except for its electric charge, which is positive. The neutrino is an uncharged, nearly massless packet of energy that is in some ways similar to a photon. (There is now experimental evidence that neutrinos, once thought to be massless, do have a very small mass on the order of about 0.1 eV, which is less than one-millionth of the electron mass.) The deuterons are able to undergo further fusion with protons to form an isotope of helium:

This reaction also creates a photon, or particle of light, which carries oﬀ most of the energy released in the reaction. The bound state of 2 protons and 1 neutron is a nucleus. nuclei are in turn able to fuse with each other in the ﬁnal step of the proton-proton cycle:

The bound state of 2 protons and 2 neutrons is a nucleus. In order to create the two nuclei needed in step (3), there must be two each of reactions (1) and (2). Thus if we tally the total input, we ﬁnd that six protons have been converted to a total output of one nucleus, two protons, two positrons, two neutrinos and two photons. The positrons each soon encounter electrons and undergo mutual annihilation to create two or more photons:

Therefore the net result of the proton-proton cycle is the conversion of four hydrogen atoms into one helium atom plus energy in the form of photons and neutrinos. The energy released in these reactions is tremendous: about per kilogram of hydrogen converted.

Neutrinos interact only very weakly with matter, and they escape from the sun immediately after their creation in step (1). The various photons created in the above reactions are all extremely energetic (in the gamma ray region of the electromagnetic spectrum). They also interact strongly with matter, and therefore the gamma rays undergo repeated scattering, absorption and re-emission by the solar matter as they work their way toward the surface of the sun. The photons lose energy in these interactions, so that they are predominantly in the visible and infrared parts of the spectrum by the time they arrive at the Sun’s surface and escape into space.

There are exothermic stellar nuclear reactions other than the ones just described. However, the proton-proton cycle is responsible for about 98% of the energy generation within our own star.

At the mean distance of the earth from the Sun, the solar irradiance from photons of all wavelengths, , is

As we saw in Level 1, the energy of a photon is inversely proportional to its wavelength. Furthermore, the number of solar photons per wavelength interval is not uniform over the electromagnetic spectrum. Figure 1 shows the measured wavelength dependence of the solar spectral irradiance . The sharp dips in the curve are Fraunhofer lines, which are due to selective absorption of solar radiation by elements in the sun’s outer atmosphere. These lines are typically less than 0.1 nm wide, and they are much “deeper” (the irradiances within the lines are much less) than indicated in Fig. 1, which gives values averaged over much wider bands. The resolution of Fig. 1 is 1 nm below 630 nm, 2 nm between 630 and 2,500 nm, and 20 nm beyond 2,500 nm. For example, the prominent line centered at = 486.13 nm decreases to 0.2 of the values just outside the line at = 486.05 and 486.25; the line depth is thus said to be 0.2.

The blue curve in Fig. 1 shows the blackbody irradiance for a temperature of 5,782 K. As shown in the discussion of blackbody radiation, this is the temperature for which a perfect absorber and emitter, or blackbody, emits the same total irradiance as the total solar irradiance of . The blackbody spectrum is a reasonably good approximation for the sun’s spectral irradiance at IR wavelengths, where the solar spectrum is never more than 25% diﬀerent from the blackbody curve. However, the solar spectrum diﬀers greatly from the black body curve at ultraviolet and visible wavelengths. Solids and liquids emit radiation that is well approximated by the blackbody curve at the appropriate temperature. Gases, however, show selective absorption and emission over very narrow wavelength ranges, as seen for the Fraunhofer lines. The gases in the solar atmosphere thus do not absorb and emit like a blackbody. 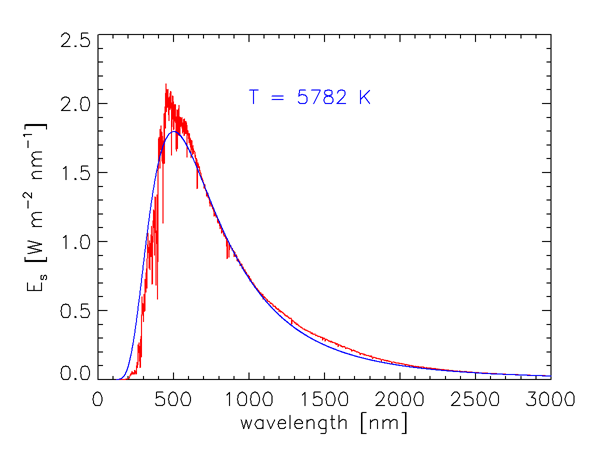 Figure 1: The extraterrestrial solar spectrum. Plotted values (red) are the 2000 American Society of Testing and Materials (ASTM) E-490 Air Mass 0 spectrum, which is available from the ASTM or here. The blue curve is the blackbody spectrum for a temperature of 5,782 K.

Figure 2 shows over the wavelength range of most interest in optical oceanography and ocean color remote sensing. The elements in the Sun’s atmosphere causing the most prominent Fraunhofer lines are identiﬁed. The Fraunhofer line at 587.5 nm is the line that was originally used in 1868 to deduce the existence of a new element, named Helium (after Helios, the Greek god who personiﬁed the Sun), in the Sun’s atmosphere 30 years before it was discovered on earth. 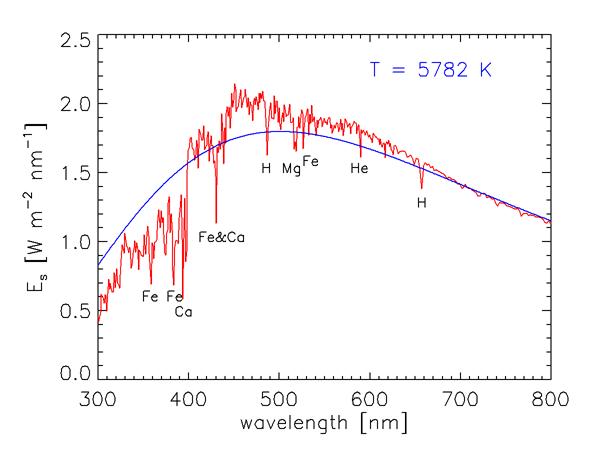 Figure 2: Expanded view of Fig. 1 for the wavelengths of greatest interest in optical oceanography. The most prominent Fraunhofer lines are labeled by the elements causing them.

It is seldom necessary for optical oceanographers to concern themselves with the detailed wavelength dependence of seen in Fig. 2. It is usually suﬃcient to deal with values averaged over bandwidths of size , which correspond to the bandwidths of the optical instruments routinely used in underwater measurements and remote sensing. Table 1 gives the distribution of in several broad wavelength bands. About two thirds of the Sun’s energy is in the near-ultraviolet to near-infrared bands relevant to optical oceanography.

It is not the solar irradiance at the top of the atmosphere, but rather the sunlight that actually reaches the sea surface, that is relevant to oceanography. The magnitude and spectral dependence of the solar radiation reaching the earth’s surface are highly variable functions of the solar angle from the zenith (i.e., of the time of day, date, and latitude) and of atmospheric conditions (cloud cover, humidity, aerosols, ozone concentration, etc.). Figure 3 illustrates the variability in how much of the total solar irradiance reaches the sea surface. The red curve in that ﬁgure is the extraterrestrial solar irradiance averaged over 10 nm bands. The other curves show the total (diﬀuse plus direct) sea-level downwelling plane irradiance for a range of sun and sky conditions, also averaged over 10 nm bands. These curves were computed using an extended RADTRAN atmospheric radiative transfer model (Gregg and Carder (1990), as extended to 300 and 1000 nm). 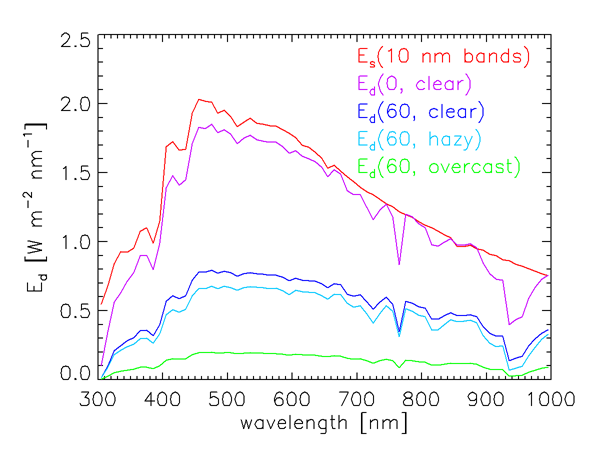 The curve in Fig. 3 is for the Sun at the zenith and a clear marine atmosphere (marine aerosols, sea-level relative humidity 80%, horizontal sea-level visibility 15 km, etc.). Rarely would this much of the solar irradiance actually reach the earth’s surface. The curve is for the same atmospheric conditions, but with the sun at a 60 deg zenith angle. The reduction in the surface irradiance is due primarily to the increased path length through the atmosphere. The curve shows the eﬀect of going from a clear atmosphere to a cloud-free atmosphere but with increased humidity (95%) and aerosol concentration (mixed marine and continental aerosols) , leading to a hazy atmosphere with reduced visibility (5 km). The green curve is for a heavy overcast, for which no Sun is visible.

The sea-level irradiances seen in Fig. 3 also show the eﬀects of absorption by gases in the earth’s atmosphere. Ozone (which was 300 Dobson units in these computations) greatly reduces the irradiance reaching the surface near 300 nm. The prominent dip near 765 nm is due to oxygen, and the broad dip starting near 930 nm is due to water vapor.

Table shows typical sea-level irradiances over the visible wavelength band from 400 to 700 nm. These values can show considerable variability depending on cloudiness and atmospheric conditions.

It is instructive to consider the number of photons needed to generate typical irradiances and the environmental eﬀects of these irradiances. Recall from Eq. (1) of the Units page that a single photon carries an energy of Consider a clear-sky solar irradiance of, say, , i.e., on each square meter each second. If we use for the average wavelength of the solar irradaince, this irradiance corresponds to

The heating rate of the water due to absorbed irradiance is (from Eq. (6) of the Gershun’s law page)

If this irradiance is absorbed by the upper one meter of water (as can be the case in very turbid water), then the heating rate within that 1 m layer of water is

A 10 hour day at this heating rate gives an increase of , which is very large.

The linear momentum imparted to the 1 m layer of water by absorption of these photons is, by Eq. (??),

Equation (3) of the Units page gives the maximum angular momentum that can be carried by these photons:

This we see that the physical importance of the sunlight incident on the upper ocean lies in its energy transport and not in its momentum transport. This is consistent with everyday experience: sunlight heats us up, but it does not push us around.

Comments for Light from the Sun: