This page shows how polarizied light is reﬂected and transmitted by a level air-water surface. The geometry is the same as for the Level 1 discussion of Fresnel reﬂectance and transmittance of unpolarized light by a level sea surface. Now, however, the state of polarization of the incident light is described by a four-component Stokes vector, as described on the page on Stokes Vectors. Consequently, reﬂection and transmission by the surface are described by matrices.

The state of polarization of a light ﬁeld is speciﬁed by the four-component Stokes vector, whose elements are related to the complex amplitudes of the electric ﬁeld vector resolved into directions that are parallel () and perpendicular () to a conveniently chosen reference plane. However, there are two versions of the Stokes vector seen in the literature, and these two versions have diﬀerent units and refer to diﬀerent physical quantities. The coherent Stokes vector describes a quasi-monochromatic plane wave propagating in one exact direction, and the vector components have units of power per unit area (i.e., irradiance) on a small surface element perpendicular to the direction of propagation. The diﬀuse Stokes vector describes light propagating in a small set of directions surrounding a particular direction and has units of power per unit area per unit solid angle (i.e., radiance). It is the diﬀuse Stokes vector that appears in the vector radiative transfer equation. The diﬀerences in coherent and diﬀuse Stokes vectors are rigorously discussed in (Mischenko, 2008).

For either air- or water-incident light, denotes the diﬀuse Stokes vector of the incident light, is the reﬂected light, and is the transmitted light. Angles , , and are the incident, reﬂected, and transmitted directions of the light propagation measured relative to the normal to the surface. For a level surface, , , and all lie in the same plane.

There are four matrices to describe reﬂection and transmission: describes how air-incident light is reﬂected by the water surface back to the air, describes how air-incident light is transmitted through the surface into the water, reﬂects water-incident light back to the water, and transmits light from the water into the air. However, because , , and are coplanar, scattering by the level surface does not involve rotation matrices as does scattering within the water body. (Or, from another viewpoint, the incident and ﬁnal meridian planes and the scattering plane are all the same, the rotation angles between meridian and scattering planes are 0, and the rotation matrices reduce to identity matrices.)

The reﬂection and (especially) transmission of polarized light by a dielectric surface such as a level water surface are rather complicated processes, and the literature contains a number of diﬀerent (and, indeed, sometimes incorrect) mathematical formulations of the equations. The formulas given in (Garcia, 2012) are used here. Note, however, that although the equations in (Garcia, 2012) are correct, some of his derivations and interpretations are incorrect, as explained by (Zhai, et al. (2012). Both papers must be used to understand the equations now presented. The equations in Garcia will be referenced by (G21) and so on; the corresponding equations in (Zhai et al. (2012) will be referenced as (Z5), etc.

The reﬂectance and transmittance matrices have a general formulation for the interface between any two dielectric media a and b. Let be the index of refraction of medium a and be that of medium b. In general and are complex numbers, but for the air-water surface we take and to be real indices of refraction. For reﬂection, the reﬂected angle equals the incident angle . For transmission from a to b, the transmitted angle is given by Snel’s law, , or

With these preliminaries, the reﬂectance matrix is (G10)

Here denotes the real part of and is the imaginary part.

The transmission matrix is (G11 or Z3)

The components of these equations are given by (G7):

The factor is deﬁned below in Eq. (23). In general, the indices of refraction are complex numbers and these equations must be used. However, for real indices of refraction, the matrix elements can be simpliﬁed at the expense of having a special case for water-incident angles greater that the critical angle.

Then for the case of air-incident light, i.e., , or water-incident light with the incident angle less than the critical angle, i.e., and , the equations yield the real forms (G14 and G15)

It should be noted that for the case of normal incidence, , both and reduce to

This gives a reﬂectance of for , for both air- and water-incident light.

For the case of total internal reﬂection, i.e., and , the following equations are to be used (G22):

and all elements of the transmission matrix elements are 0:

Finally, the all-important transmission factor in Eq. (3) is given by

when computing the transmittance for diﬀuse Stokes vectors. These equations give everything needed to describe reﬂection and transmission of polarized light by a level sea surface.

Figure 1 shows the and matrices as a function of incident angle for and . The (1,1) matrix elements are shown in the upper-left plot, and the (4,4) elements are in the lower-right plot. The red curves are and the blue curves are . The reﬂectance curve for is the Fresnel reﬂectance for unpolarzed light as given in the section on Fresnel formulas for unpolarized light: it starts at 0.021 for normal incidence and , and rises to 1 at grazing incidence. The transmission curve for on the other hand may look incorrect because it has values greater than one. Its maximum value at normal incidence is

However, this value is indeed correct and is a consequence of the fact that we are now dealing with a diﬀuse Stokes vector with units of radiance, and the law for radiance applies. The curves in Fig.(1) agree exactly with the corresponding plots in (Garcia, 2012) (his Figs. 1-3). 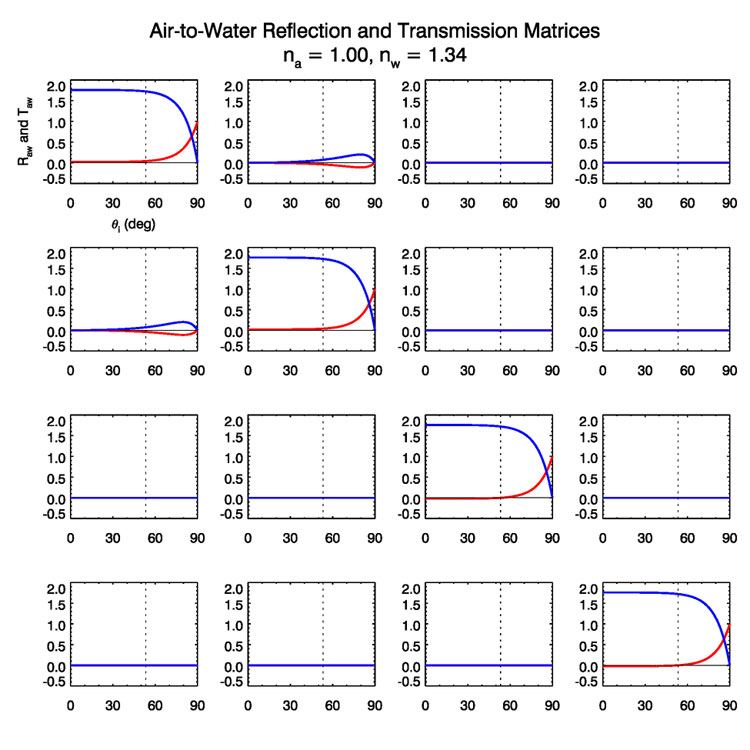 Figure 1: Reﬂectance and transmittance matrices as functions of the incident angle for air-incident radiance. is in red and is in blue. The vertical dotted line at is Brewster’s angle.

If we were dealing with coherent Stokes vectors with units of irradiance, then the factor of Eq. (23) would be

The transmittance for normal incidence then would be , which with the reﬂectance sums to one (and also sums to one for all other incident angles). As noted elsewhere, it is the Law of Conservation of Energy, not the law of conservation of radiance.

The vertical dotted line in Fig. (1) shows the location of Brewster’s angle,

It should also be noted that the non-zero means that unpolarized radiance becomes partly horizontally polarized upon transmission through the surface.

Figure (2) shows and as reduced scattering matrices, i.e. after dividing each element by its (1,1) component. These plots show more clearly the behavior of the matrix elements at Brewster’s angle. These curves agree exactly with the corresponding plots in (Kattawar and Adams (1989) (their Fig. 4). 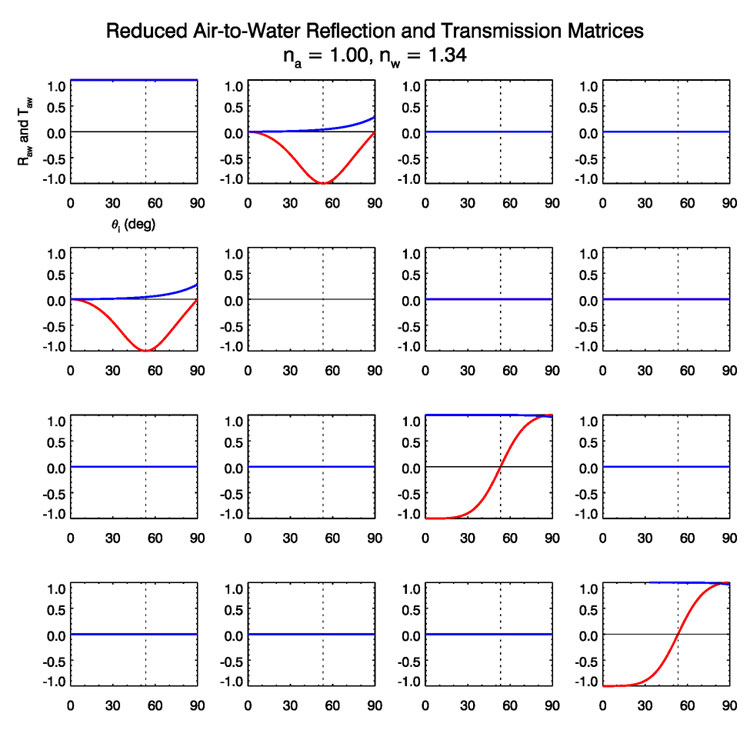 Figure (3) shows and . The vertical dotted line is at the critical angle for total internal reﬂection, which in the present case is . For angles less than the critical angle, the transmission is never more than about 0.54. This again shows the n-squared law for radiance. In going from water to air, the in-water radiance is decreased by a factor of when crossing the surface because the solid angle in air is greater than that in water by a factor of . The (1,1) elements show that beyond the critical angle there is no transmission and total reﬂection. These curves agree with the corresponding plots in (Garcia (2012) (his Figs. 4-6).

Figure (4) shows the reduced water-to-air matrices. These curves agree with the corresponding plots in (Kattawar and Adams (1989) (their Fig. 5. The signs of the and elements are reversed in the original Fig. 5, which had a sign error.). 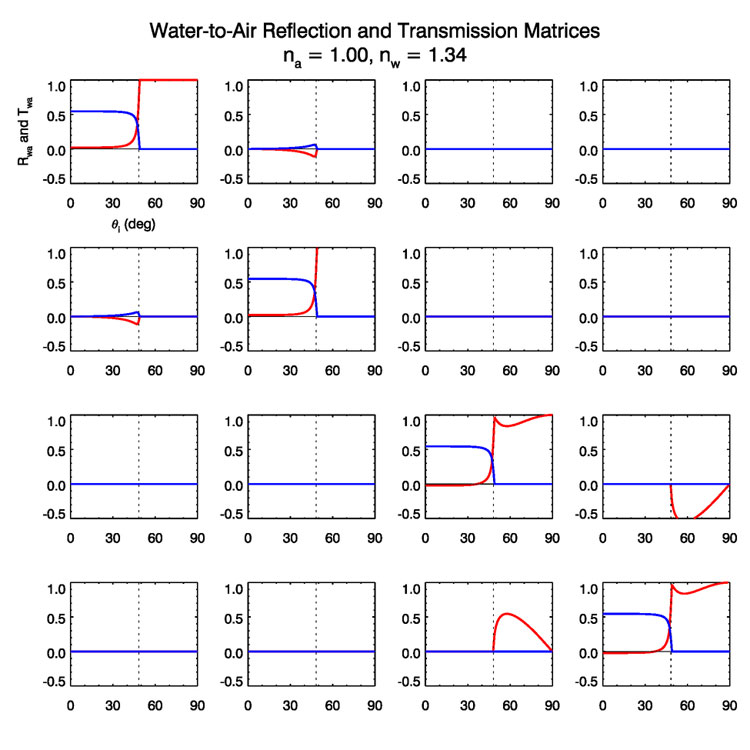 Figure 3: Reﬂectance and transmittance matrices as functions of the incident angle for water-incident radiance. is in red and is in blue. The vertical dotted line is the critical angle for total internal reﬂectance. 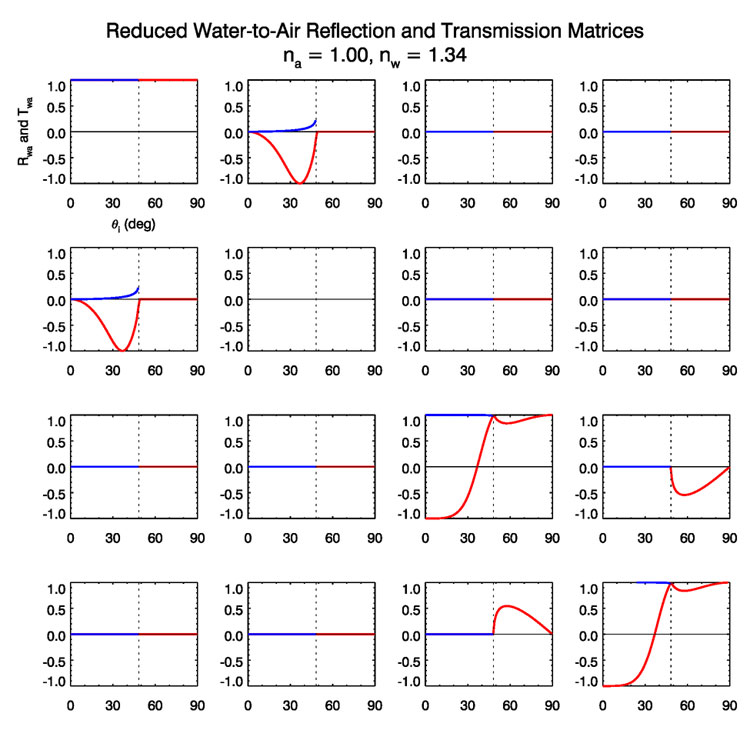 The non-zero matrix elements of course depend on incident angle as seen above, but also depend weakly on the wavelength via the wavelength dependence of .

Comments for Fresnel Equations for Polarization: