The concentrations of absorbing gases are usually measured as column concentrations, i.e., the number of molecules per unit area, or as the equivalent in Dobson units. One Dobson unit refers to a layer of gas that would be thick at standard temperature and pressure, or about . 1000 DU = 1 atm-cm; that is, 1000 DU is the number of molecules that would give a layer of gas 1 cm thick at a pressure of one atmosphere. 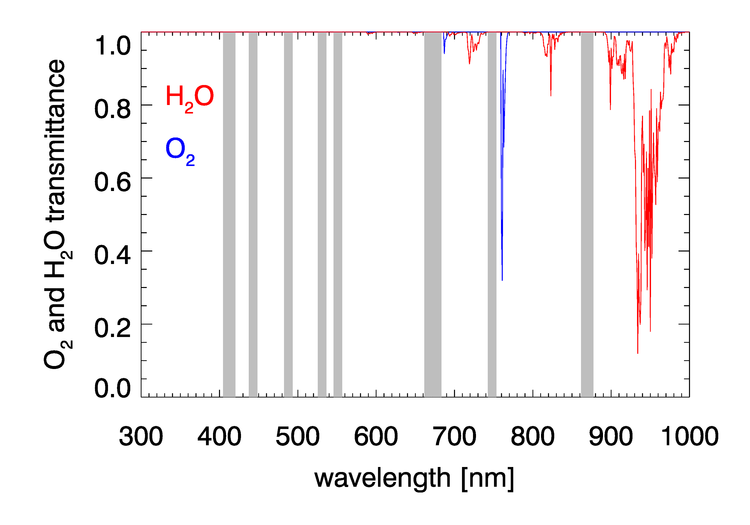 Figure 1: Transmittance by and for a moist tropical atmosphere. The resolution is 1 nm. The MODIS sensor bands are shaded in gray. 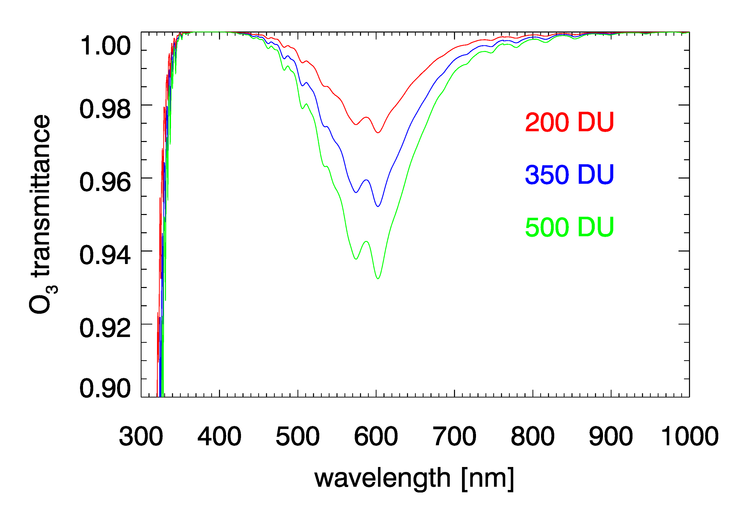 Figure 2: Transmittance by for 200, 350, and 500 Dobson units and a vertical path through the atmosphere. 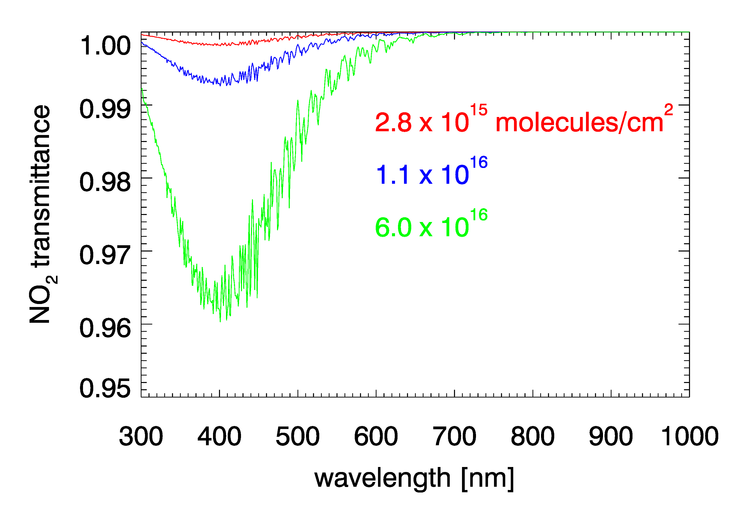 Figure 3: Transmittance by for low (), typical (), and high () concentrations of and a vertical path through the atmosphere.

For optically thin absorbing gases that are high in the atmosphere ( in particular), it is possible to correct for absorption using just the geometric air mass factor computed by

Note that an absorbing gas reduces the TOA radiance because light is lost to absorption. Correcting for this loss will increase the TOA radiance or reﬂectance, with the eﬀect being greatest at blue wavelengths where multiple scattering is greatest.

The diﬀuse transmission by ozone can be written as 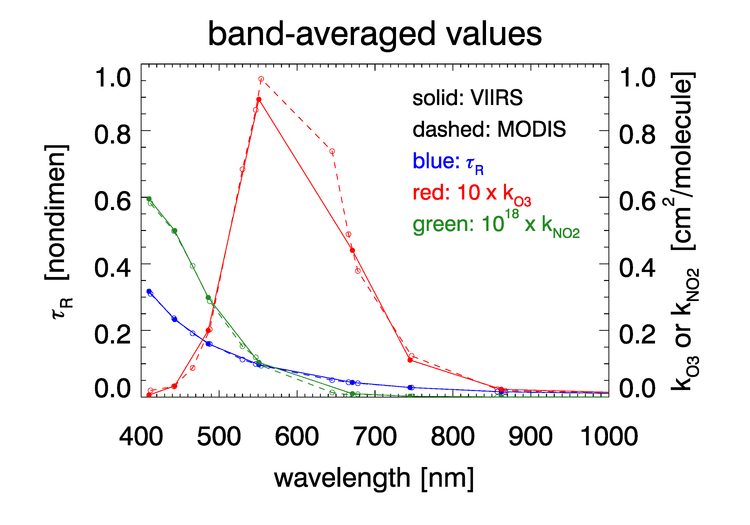 Nitrogen dioxide occurs both in the stratosphere and near the Earth’s surface. in the lower atmosphere is generated primarily by human activities (automobiles, industry, ﬁres), and the highest concentrations are near the earth’s surface in industrial areas. Numerical simulations show that failure to correct for absorption by can give errors of approximately 1% in TOA radiances at blue wavelengths, which result in errors in retrieved water-leaving radiances (Ahmad et al. (2007)).

The geometric air mass factor of Eq. (1) and a simple atmospheric transmittance function like that of Eq. 2) are valid for ozone absorption corrections because scattering by ozone in the upper atmosphere is negligible. However, such functions may be not adequate for correction calculations because of multiple scattering in the dense lower atmosphere. Further guidance for the form of the correction comes from the observation that the water-leaving radiance sees all in the atmosphere, so the total concentration must be used to correct for absorption. However, the upwelling atmospheric path radiance , which is generated throughout the atmosphere, is not strongly inﬂuenced by the absorbing gas very near the surface. Extremely accurate numerical simulations show that in that case, , the concentration between an altitude of 200 m and the TOA, can be used as a satisfactory measure of concentration. This result leads to diﬀerent corrections for the measured TOA path radiance and for the water-leaving radiance.

Let be the uncorrected, observed (measured) TOA reﬂectance, and let be the TOA reﬂectance corrected for absorption eﬀects. Comparison of numerical simulations and analytical approximations justiﬁes a correction of the form

where is the concentration between an altitude of 200 m and the TOA. This simple formula gives values that are within 0.15% of the values obtained by exact numerical simulations that account for the total column concentration and multiple scattering.

The correction for water-leaving radiance proceeds as follows. The reﬂectances can be written as (Ahmad et al. (2007), Eqs. 1 and 7)

(omitting the arguments for wavelength, azimuthal angle, and wind speed). Here is the diﬀuse transmission along the viewing direction from the sea surface to the sensor, is the diﬀuse transmission of downwelling solar irradiance, and is the water-leaving reﬂectance at the sea surface. Consider now only the path and water-leaving terms, and omit the directional arguments for brevity. Then multiplying this equation by the exponential correction factor for the observed TOA reﬂectance gives

Numerical simulations show that both the path reﬂectance and the diﬀuse transmission term are accurate to within 0.2% with this correction. However, the error in the water-leaving factor, is in error by 0.5 to 1.5%, which is unacceptably large. The reason for the greater error in this term is that it depends on the downwelling irradiance, which passes through the entire atmosphere and thus sees the total concentration , not just the reduced concentration that is adequate for correction of the TOA path term. However, the error in this term also decreases to if is replaced by . This error can be reduced still further by the following empirical procedure.

For bands where absorption is signiﬁcant (e.g., at 412 or 443 nm), the atmospheric correction is determined as always (without correction) using the NIR bands. However, rather than subtract these terms from the corrected TOA reﬂectance, the atmospheric correction terms (including the Rayleigh reﬂectance) are reduced for absorption by applying a factor of . The computed path reﬂectance for is then subtracted from the observed TOA reﬂectance to obtain , which is the TOA value for water-leaving reﬂectance in the presence of . The -corrected value of the water-leaving reﬂectance is then obtained by multiplying this by , which gives

Note that is the -corrected transmission term, and is the desired -corrected water-leaving reﬂectance. This equation is then solved to obtain :

Note that the exponentials are increasing the magnitude of the water-leaving radiance compared to the no- case, which accounts for the loss due to absorption along the paths of the Sun’s direct beam and the viewing direction. The term for the Sun’s direct beam uses the full column concentration , whereas the viewing-path term uses the reduced concentration . This is an artiﬁce that brings the analytical correction of Eq. (4) into close agreement with the exact numerical calculations. The absorption cross section is a function of wavelength. Computations are done for at 18 deg C, and then a temperature correction is made. (Ahmad’s Table 1 gives the band-averaged absorption cross sections for SeaWiFS and MODIS bands, which are called in that table. This is same quantity as in his Eq. (4) and in the equations of this chapter.)