Collin Roesler and Curtis Mobley contributed to this page.

When light interacts with matter one of three things can occur:

This page begins the discussion of the ﬁrst of these processes. Scattering is described in the Scattering Chapter beginning at Scattering Overview.

Why is Absorption Important?

where is the average of over depths 0 to . To ﬁrst order,

Here is the backscatter coeﬃcient and is the average cosine of the downwelling radiance distribution. In most waters, ; and the average cosine can be approximated by the cosine of the Sun’s direct beam angle, , as transmitted through a level sea surface. Thus a measured proﬁle of the absorption coeﬃcient allows for an approximate computation of , which in turn is directly related to the heating rate of the upper ocean (see Gershun’s Law).

However, both absorption and scattering are equally important to the prediction and understanding of light propagation.

Both absorption and scattering aﬀect visibility in ways that are illustrated in Fig. 1. Absorption removes light from a beam and thus makes a distant image darker. Wavelength-dependent absorption also alters the color of a distant image, as seen in the right panel of the ﬁgure. 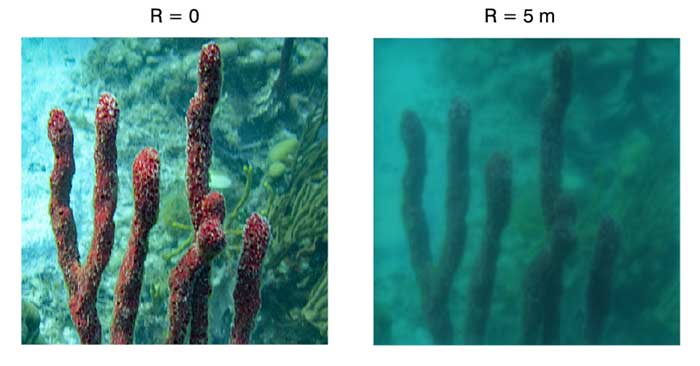 Figure 1: Appearance of a red sponge (Amphemedon compressa) seen up close and from a distance of 5 m further away in clear water. The high absorption of red light by the water itself has removed all red color after 5 m of light travel, and absorption in the blue and green has darkened the overall scene. Small-angle scattering has blurred the ﬁne spatial detail. (Left photo by C. Mobley. The right image was predicted from the left one using the image prediction technique described in Mobley (2020).)

Where is the total number of components and indicates the component, and all absorption is spectral, indicated by .

Practically, however, it is not possible to measure the absorption properties of each individual absorbing component and thus the individual components can be grouped into similarly absorbing constituents based upon similarity in their optical properties and/or analytically-based groupings:

Absorption by water (Fig. 2) is weak in the blue and strong in the red and varies with temperature and salinity. See the page on Water for further discussion. 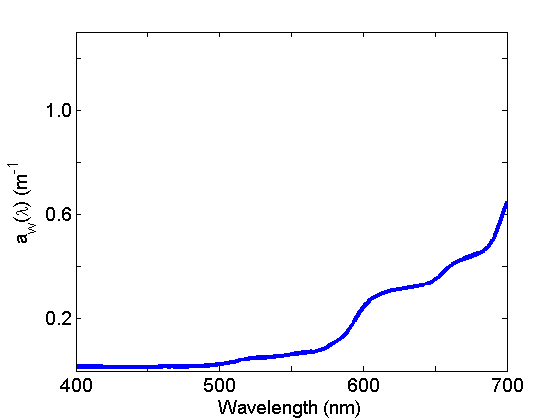 Absorption by particles is separated into phytoplankton and non-algal particles (NAP) using spectrophotometry and an extractive technique. Phytoplankton absorption (Fig. 3) demonstrates the most spectral variations of any of the components due to the individual pigment absorption spectra but in general exhibits peaks in the blue and red regions of the spectrum due to the ubiquitous presence of chlorophyll a. See the page on See the page on Phytoplankton for further discussion. 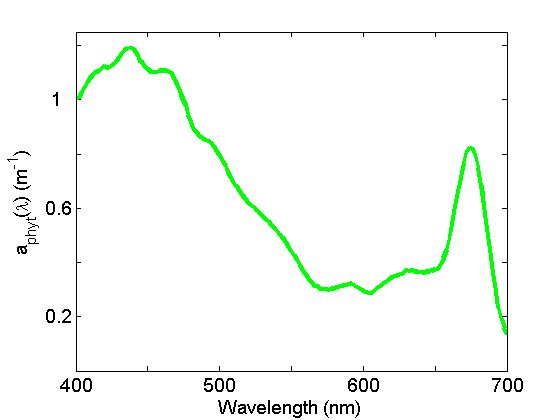 Non-algal particle absorption (Fig. 4) is strongest in the blue, decreasing approximately exponentially to the red. This component, operationally-deﬁned, includes living zooplankton and bacteria, as well as the non-pigmented parts of phytoplankton (cell walls, membranes etc), detrital material as well as inorganic particles. See the page on Non-algal Particles for further discussion. 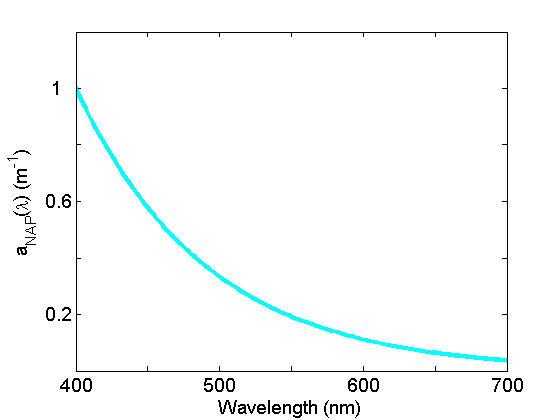 Colored dissolved organic matter (CDOM) absorption (Fig. 5) is very similar to that of NAP due in part to the similarity in composition (organic material), but generally exhibits a steeper exponential slope. This material is operationally separated from NAP by ﬁltration; CDOM is measured on the ﬁltrate passing through 0.2mm or 0.7 mm nominal pore sized ﬁlters. See the page on CDOM for further discussion. 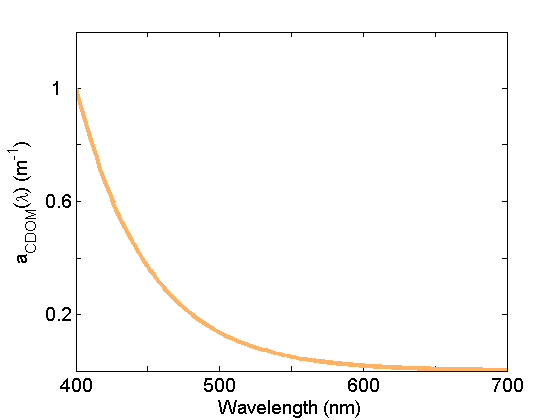 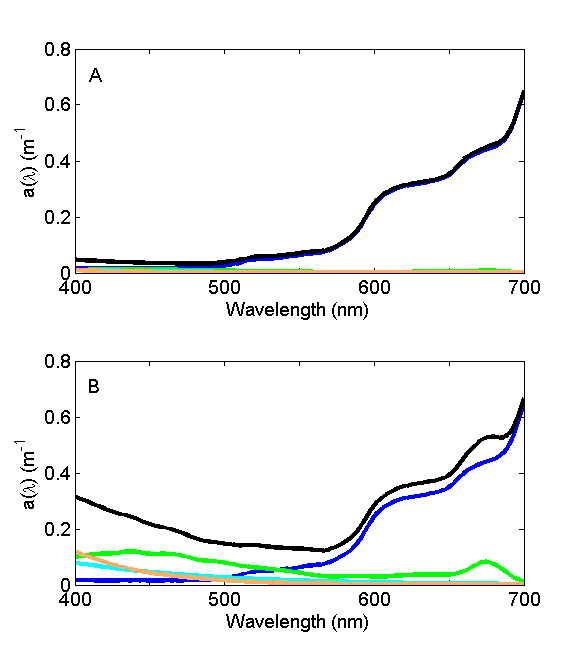 Figure 6: Component and total absorption spectra for A. clear open ocean waters where water dominates the absorption and B. eutrophic coastal waters where particulate and dissolved organic matter dominate the blue and green portions of the spectrum.