First of all, the pronunciation is RAman, not raMAN. Raman scattering is a type of inelastic scattering of light by molecules. Compton scattering (see The Nature of Light) is inelastic scattering of X-rays by electrons. Upon learning of Compton’s discovery (for which Compton received the 1928 Nobel Prize in Physics), C. V. Raman thought there should be a similar eﬀect at visible wavelengths and set out to ﬁnd it. He succeeded and subsequently received the 1930 Nobel Prize for the discovery and explanation of what is now called Raman scattering or the Raman eﬀect. (Incidentally, Raman received his bachelor’s degree in physics at 16, graduating at the head of his class, and he published his ﬁrst paper at 18. The Raman family produced a number of scientists, included Raman’s nephew Subrahmanyan Chandrasekhar, who received the Nobel in 1983. The family seems to have had good genes for science.)

The physics of Raman scattering is quite complicated, but it can be conceptualized as following. Incident light can excite a molecule in its ground state to a higher “virtual” energy level, which then immediately decays back to a lower level accompanied by the emission of light. If the decay returns the molecule to its initial state, the scattering is elastic and is called Rayleigh scattering. If the decay is to a molecular vibrational level above the ground state, then then emitted light has a longer wavelength (lower energy) than the incident light: this is Raman scattering. (See The Physics of Absorption for a discussion of electronic, vibrational, and rotational energy levels.) The use of Raman scattering, often called Raman spectroscopy, is widely used in chemistry as a way to study the vibrational energy levels of molecules. In those applications, the incident light usually comes from a laser. In the ocean, the molecule of interest is water, and the exciting light can be either sunlight or a laser.

The wavelength shift for Raman scatter by water is exceptionally large, corresponding to a wavenumber (1/wavelength) shift of about , which at visible wavelengths is many tens to more than a hundred nanometers. The time scale for Raman scattering (i.e, the time for the molecular excitation and subsequent decay) is roughly to seconds. This is much faster than the time scale of ﬂuorescence by chlorophyll or CDOM molecules, which is on the order of or longer. Thus Raman scatter can be thought of as an almost instantaneous scattering process, rather than as the absorption of light followed much later by the emission of new light.

The next sections discuss each of these quantities in turn.

The Raman scattering coeﬃcient tells how much of the irradiance at the excitation wavelength scatters into all emission wavelengths , per unit of distance traveled by the excitation irradiance. The most recently published values of for water are (Bartlett et al. (1998)) and (Desiderio (2000)). (The current version (6.0) of the HydroLight radiative transfer model uses as the default value.)

According to Walrafen (1967), the shape of for water is given by a sum of four Gaussian functions:

The values of , , and for pure water at a temperature of 25 deg C are given in Table 1. Figure 1 shows evaluated for the water parameter values of Table 1. The function shows a peak and a shoulder, which result from the sums of the four gaussians seen in Eq. (1). For water, the wavenumber shift is roughly .

Table 1: Parameter values for the Raman wavenumber redistribution function of Eq. (1), for pure water at a temperature of 25 C. Data from Walrafen (1967). 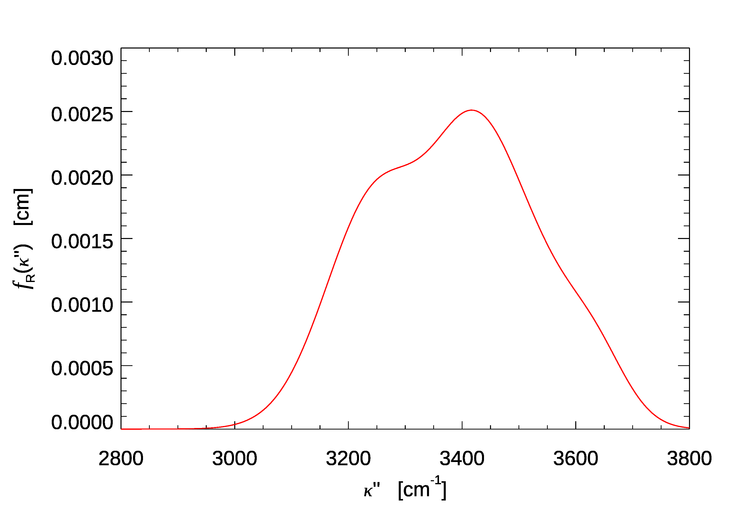 The function can be interpreted as a probability density function giving the probability that a light of any incident wavenumber , if Raman scattered, will be scattered to a wavenumber

The function satisﬁes the normalization condition

as is required of any probability distribution function. The integration limits above come from observing that as then the wavenumber , and as then . If A change of variables from to in Eq. (3) leads to the corresponding wavelength redistribution function . Thus

where the wavelengths are in nanometers. In the last equation, we have identiﬁed the function

as being the desired Raman wavelength redistribution function, with units of . 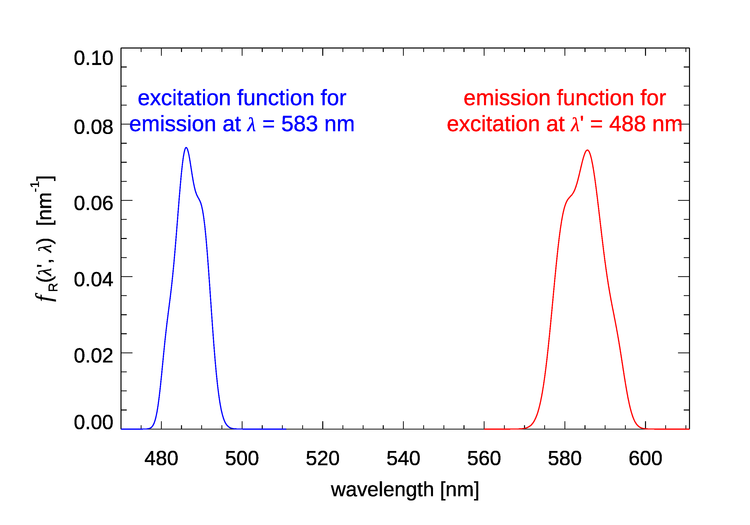 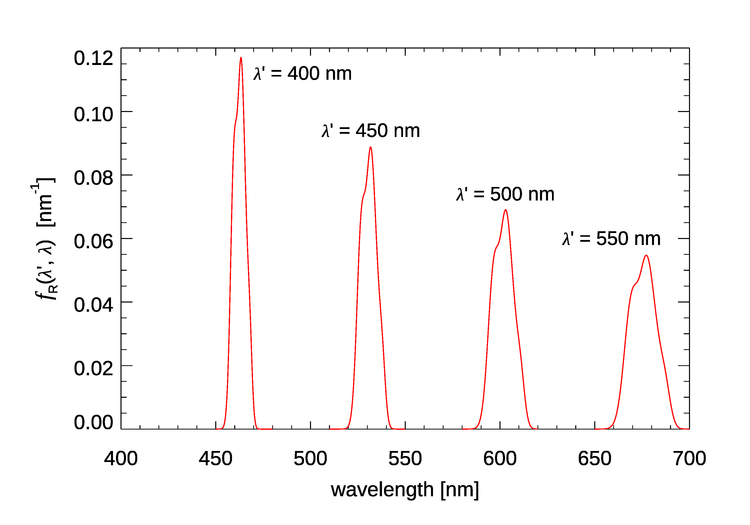 Figure 3: The Raman emission functions for four excitation wavelengths, as computed from Eq. (4).

Equation (2) can be rewritten as

and used to compute the approximate center of the emission wavelength band for a given excitation wavelength. Figure 4 shows the result. 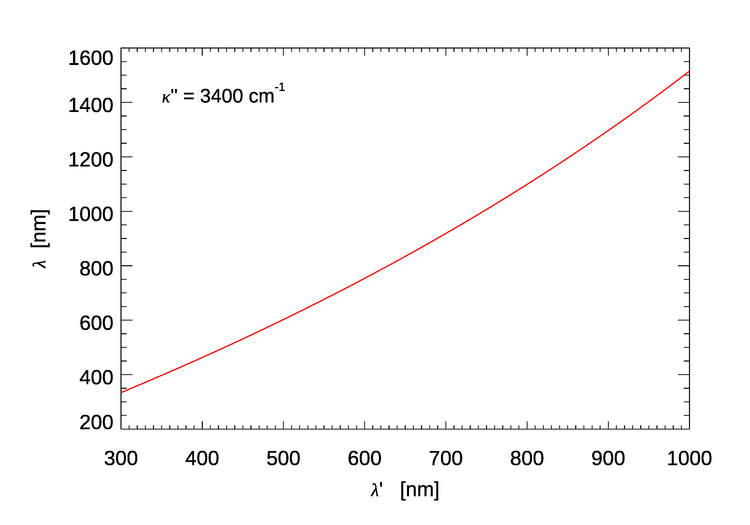 Figure 4: Approximate center of the Raman emission band for a given excitation wavelength .

The Raman phase function gives the angular distribution of the Raman scattered radiance. This function (averaging over all polarization states) is given by

where is the scattering angle between the direction of the incident and scattered radiance, and is the depolarization factor. The value of depends on the wavenumber shift (Ge et al. (1993), their Fig. 2). For a value of , , in which case the phase function is

The scattering angle is given by , which can be computed from via Eq. (5) of the Geometry page.

Figure 5 shows the eﬀect of Raman scattered radiance on the remote-sensing reﬂectance for chlorophyll values of and as simulated by HydroLight. The HydroLight runs used a bio-optical model for Case 1 water for which the absorption and scattering properties of the water are determined only by the chlorophyll concentration. The water was homogeneous and inﬁnitely deep. The Sun was at a 30 deg zenith angle in a clear sky; the wind speed was . Identical runs were made with and without Raman scatter included in the runs. It is seen that for the very clear water with , is as much as 22% higher, but for the water with , Raman increases by at most 5%. The Raman eﬀect decreases but still can be signiﬁcant in higher chlorophyll waters or in turbid Case 2 waters. Although diﬃcult to see in Fig. 5, the Raman eﬀect does not “turn on” until about 340 nm even though the HydroLight run started at 300 nm. This is because the start of the emission band for excitation near 300 nm is around 340 nm (recall Fig. 4). 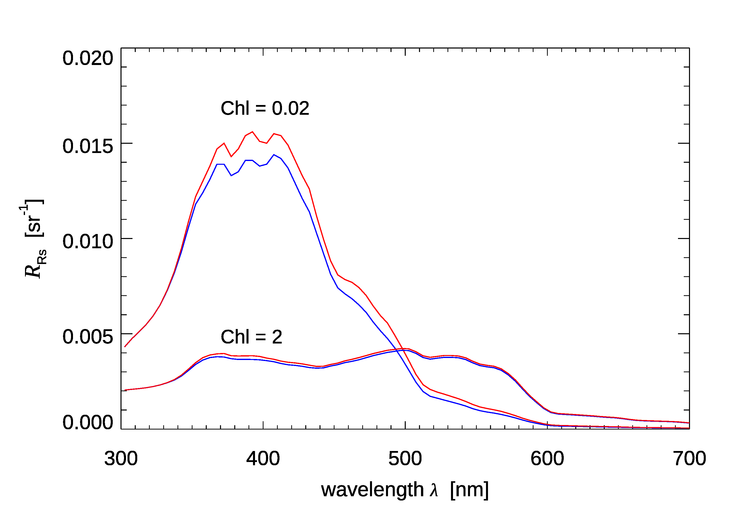 Although Raman scattering does not have a large eﬀect on except in the clearest water, it can be the dominant source of light at red wavelengths at depths where absorption by water has removed most of the incoming sunlight. This is illustrated in Fig. 6. HydroLight was run for Case 1 water with a chlorophyll concentration of , which is typical of open ocean water. The Sun was at a 30 deg zenith angle in a clear sky. The run started at 300 nm, so that Raman eﬀects would be present at wavelengths greater than 340 nm. At 400 and 500 nm, the contribution by Raman scattered light to the upwelling irradiance is almost unnoticeable. This is because at these wavelengths elastically scattered solar radiance is the main contributor to the upwelling irradiance. At 580 nm, water absorption () is beginning to ﬁlter out enough of the solar radiance that the Raman contribution, which comes from wavelengths around 485 nm (see Fig.4), where the light penetrates well to depth, is becoming the main contribution to . At 600 nm, water absorption () has removed almost all of the solar light below about 20 m. Below 20 m, almost all of comes from Raman scattered light that originates from wavelengths around 500 nm, where sunlight penetrates well to depth. It should be noted that below about 40 m, the depth rate of decay of (i.e., ) is almost the same as the rate of decay the irradiance at 500 nm. This is because the light at 500 nm is the source of the light at 600 nm.

It was the measurement of unexpected upwelling irradiance at depths below 50 m and wavelengths greater than 520 nm that led Sugihara et al. (1984) to suggest that the unexpected upwelling irradiance came from downwelling irradiance a blue-green wavelengths being Raman scattered. A number of subsequent studies (e.g., Stavin and Weidemann (1988), Marshall and Smith (1990)) conﬁrmed this hypothesis. Many studies since have studied Raman eﬀects on ocean light ﬁelds. For example, Kattawar and Xu (1992) and Ge et al. (1993) studied the ﬁlling in of Fraunhofer lines in underwater light by Raman scattering. 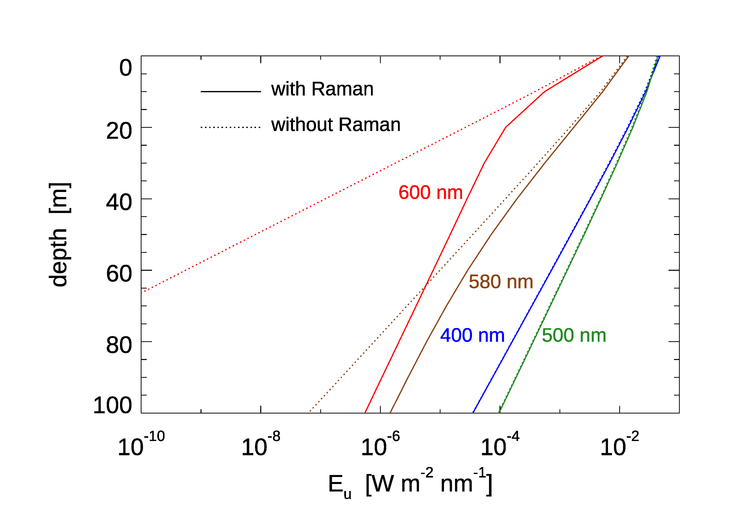 Figure 6: HydroLight simulations of with and without Raman scattering.

Another interesting example of the contribution of Raman scattering to in-water radiances is seen in Fig. 7. This plot shows the downwelling (zenith-viewing) radiance generated from a HydroLight run using its option for simulating LIDAR illumination at one wavelength in an otherwise black sky. The inputs were as follows: 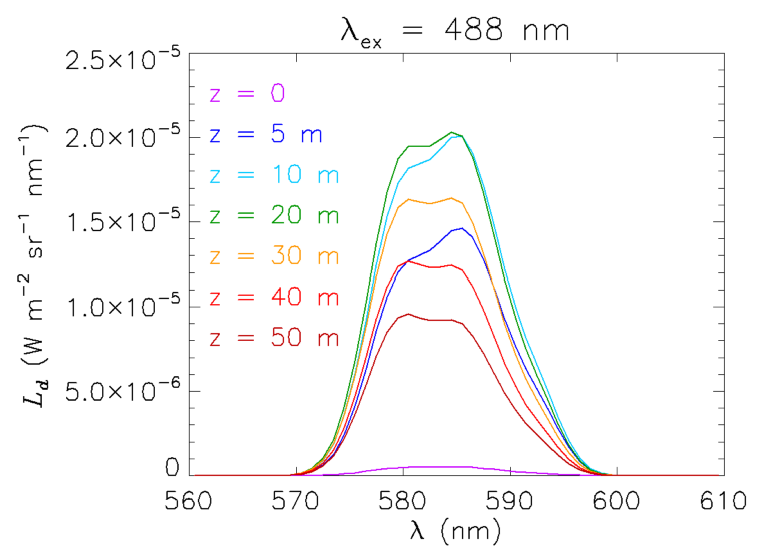 Figure 7: Downwelling Raman-scattered radiance as a function of depth and wavelength over the Raman emission band for 488 nm excitation. The wavelength shape of the emission band depends on depth because of wavelength-dependent absorption.

The curves in Fig. 7 are explained as follows. At depth 0, just below the sea surface, the only contribution to is upwelling radiance that is reﬂected back downward by the sea surface. By 5 m depth, there is now enough water above the simulated measurement instrument that the water column is generating signiﬁcant downwelling radiance. Note that the shape of the emission has the same shape as the emission function seen in Fig. 2, namely a peak near 585 nm with a shoulder at about 580 nm. As the depth increases to 10 and then 20 m, the magnitude of increases, but the shape of the emission begins to ﬂatten between 580 and 585. By 30 m, the magnitude of has decreased because of the decrease in the radiance penetrating to this depth from the water between the surface and 30 m, and the magnitude continues to decrease as the depth becomes greater. However, the shape of the emission at 30 m shows almost the same magnitudes at 580 and 585 nm, and at 40 and 50 m, the peak emission is actually greater at 580 than at 585 nm. This may seem strange because the shape of the Raman emission function seen in Fig. 2 is the same for all depths.

This “reversal” of the “peak-shoulder” shape of the emission is a consequence of the diﬀerence in absorption across the emission wavelengths. The total absorption (water plus phytoplankton) increases by a factor of three (from 0.071 to ) between 570 and 600 nm, and by 22% (from 0.091 to ) between 580 and 585 nm. These rapidly increasing absorption values change the shape of the local (at each depth) emission function when integrated over depth to obtain the total , which has contributions from all depths. Simply stated, the higher absorption at the 585 nm peak lets relatively less of the radiance emitted above a given depth reach the measurement depth than for the shoulder at 580 nm, so the 585 nm peak appears smaller relative to the shoulder than what is seen for the emission function of Fig. 2.

The claim that the change is shape with depth of the Raman emission is due to wavelength-dependent absorption can be veriﬁed as follows. An “artiﬁcial water” IOP data ﬁle was created with the IOP values between 570 and 600 nm having the values at 570 nm. The water IOPs are then the same over the entire range of emission wavelengths seen in Fig. 7. The resulting Raman spectra are seen in Fig. 8. Now, without the wavelength-dependent absorption, the shape of does not change with depth and, indeed, looks exactly like the shape of the emission function seen in Fig. 2. The magnitude of the curves is greater than before because the absorption is less. Of course, if the HydroLight run had been made at 5 or 10 nm resolution, then the shape of the emission band would not have been resolved. However, the total Raman-scattered power would have been the same, but spread over the wider bands. 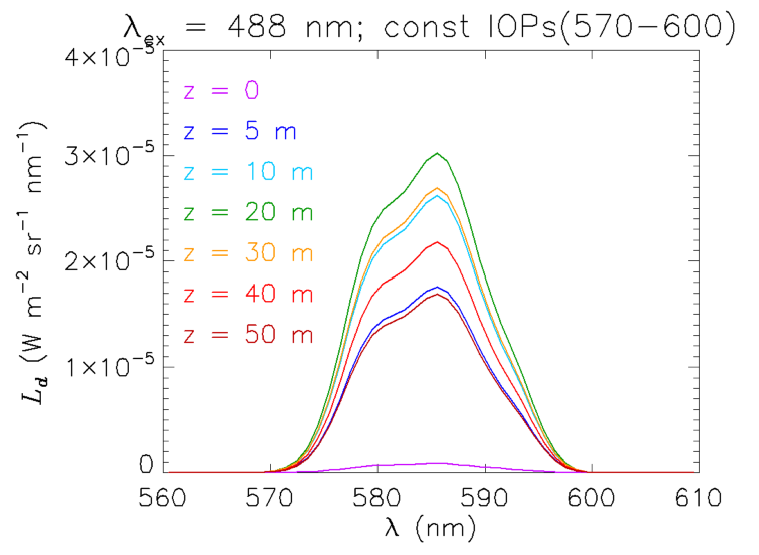 Figure 8: Downwelling Raman-scattered radiance as a function of depth for the case of artiﬁcial water IOPs having the same values from 570 to 600 nm. The shape of is now independent of depth and is the same as the Raman-emission function of Fig. 2. 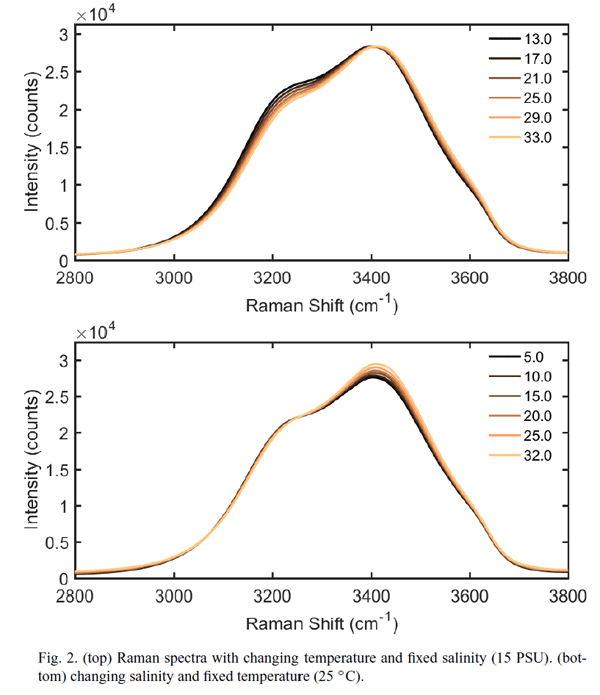 Figure 9: Dependence of the Raman wavelength redistribution function on temperature and salinity. (Figure 2 from Artlett and Pask (2017) reproduced by permission of the Optical Society of America)

« Effect of Shape on Optical Properties

Theory of Fluorescence and Phosphorescence »