Figure 1 shows the sensor response functions (SRF) of the MODIS-Aqua bands used for ocean color remote sensing; each response function is normalized to 1 at its maximum. Visually, in this plot with a linear ordinate axis, the bands appear to be well deﬁned and narrow, with full-width, half-maximum (FWHM; the wavelengths at which the function is one-half of its maximum) widths of 10 to 15 nm. However, when plotted with a logarithmic ordinate as in Fig. 2, it is seen that there is signiﬁcant “out-of-band” (OOB) sensitivity; i.e., a non-zero response outside the nominal band width. In each plot, the black curve represents a TOA radiance with a wavelength dependence of . 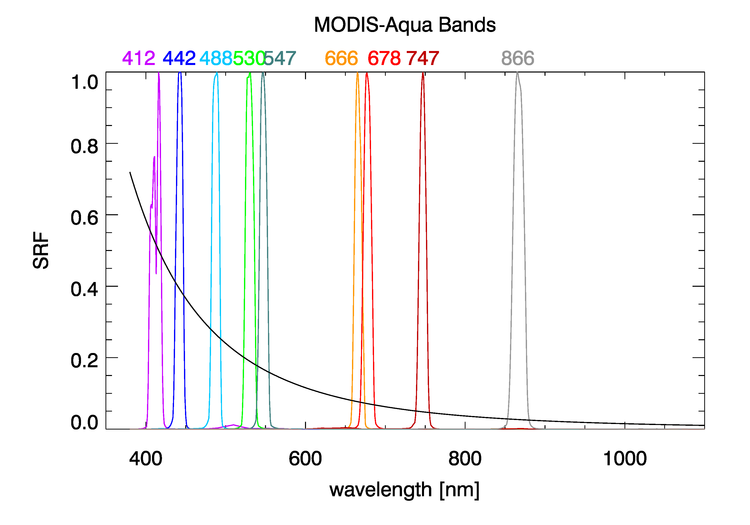 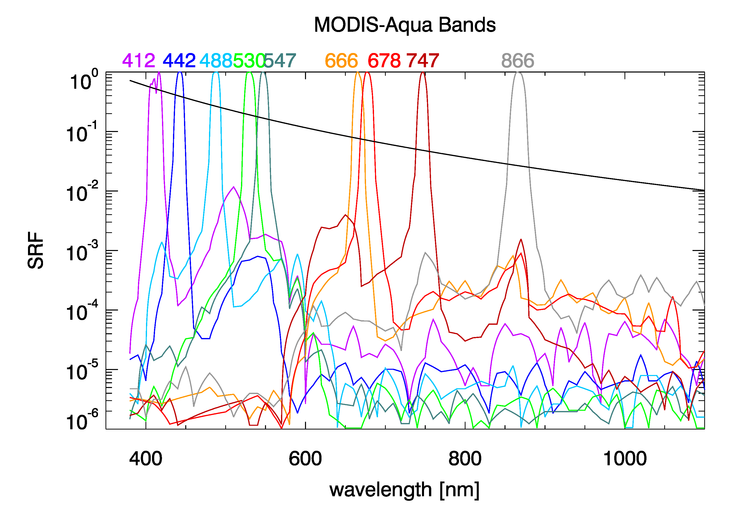 Figure 2: Same as Fig. 1 except that the ordinate axis is logarithmic to show the out-of-band response.

Rayleigh scattering with a dependence dominates the total TOA radiance. If a radiance with such a wavelength dependence is measured by sensors having the response functions shown in Figs. 1 and 2, the total measured radiance in the band over the 380-1100 nm range shown in the ﬁgures will be (Gordon (1995), Eq. 8)

Deﬁne the “in-band” part of the total signal to be the part detected between chosen lower () and upper () wavelengths. The NASA Ocean Biology Processing Group (OBPG) uses the wavelengths at which the SRF drops to 0.1% of its maximum value to deﬁne the lower and upper boundaries of the in-band region. For the nominal 488 nm band, for example, and . (The FWHM boundaries for the 488 nm band are and .) The part of the measured radiance that comes from in-band wavelengths is then

Gordon (1995) points out that the OOB corrections must be applied separately to the individual components of the TOA radiance because the OOB response depends on the spectral shape of the radiance. That is, separate corrections must be applied to the Rayleigh, aerosol, and water-leaving radiances. Those corrections are built into the sensor-speciﬁc Rayleigh and aerosol LUTs described above. This section describes how the OOB correction is applied to the remote-sensing reﬂectance after the preceding steps of the atmospheric correction process have been carried out.

It should be noted that OOB corrections are also required when comparing measurements made by sensors having diﬀerent spectral responses. This happens, for example, when comparing a nominal MODIS 412 nm band value with an in-situ measurement made by a multispectral radiometer having a nominal 412 band. The ﬁlters in the MODIS and in situ radiometer instruments will not have exactly the same spectral responses or nominal bandwidths. In general, it is desirable to reference any measurement to what would be obtained by an ideal sensor with a perfect response function deﬁned by the nominal FWHM. This is illustrated in Fig. 3 for the MODIS-Aqua 412 band and a sensor with a perfect “top hat” response for nm. For a radiance with a wavelength dependence, 18.1% of the MODIS nominal 412 band response comes from , 60.5% comes from within the nominal 10 nm bandwidth of the perfect sensor, and 21.4% comes from nm. 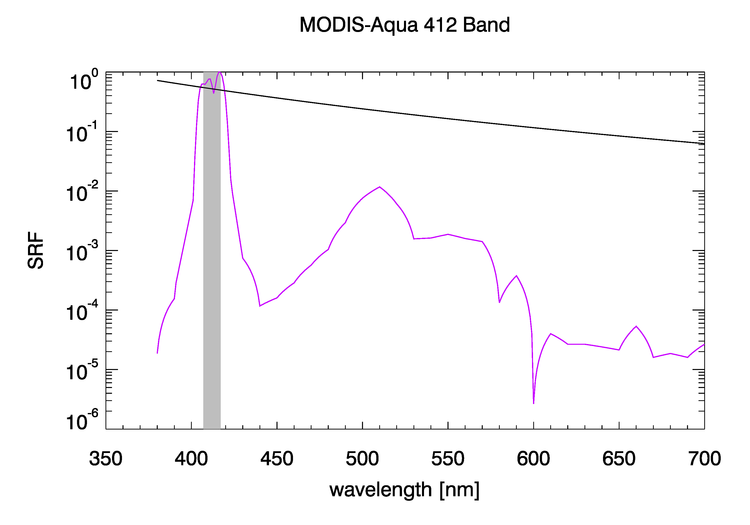 Figure 3: The MODIS-Aqua relative sensor response (purple) and a perfect sensor with a 10-nm FWHM (gray shading). The black line represents a radiance proportional to .

Figure 4 shows as computed for Case 1 water using a model of the type developed in Morel and Maritorena (2001) for and . 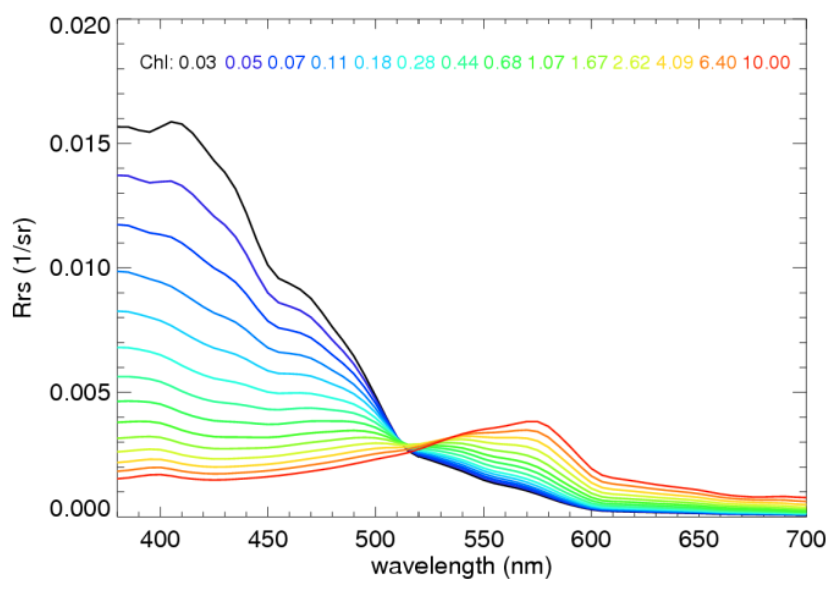 Figure 4: spectra as functions of the chlorophyll concentration.

For each nominal sensor band labeled by , and for each chlorophll value , the spectra of Fig. 4 are used in equations of the form of (1) with appropriate integration limits to compute:

Figure 5 illustrates the results of these calculations for the SeaWiFS nominal 555 nm band. This ﬁgure shows chlorophyll values only for , which was felt to be the upper limit of reliability of the chlorophyll-based model of Fig. 4. A similar ﬁgure can be drawn for each sensor band. If the chlorophyll concentration were known, a rearrangement of Eq. (2) and ratio curves like that of Fig. 4 could be used to compute the correction to the measured for the band. 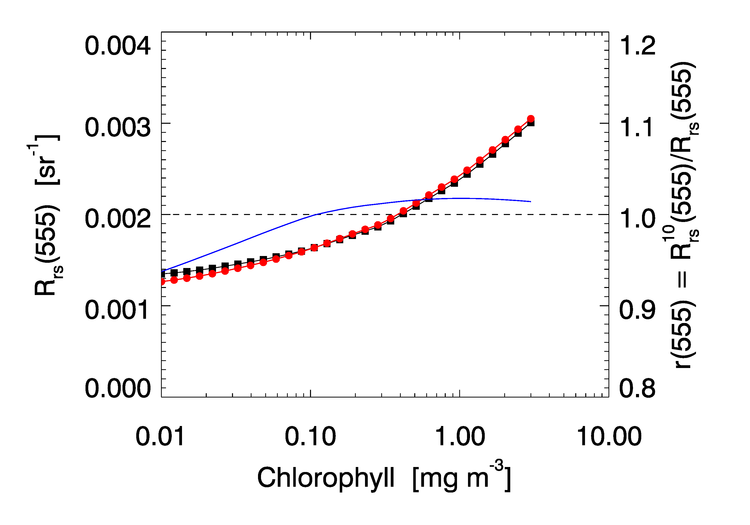 However, the chlorophyll concentration is not yet known. To proceed, the curves like the one shown by the blue line of Fig. 5 are used to compute correction factors as functions of the ratio of the uncorrected to the uncorrected . Each chlorophyll value shown in ﬁgures like 5 for the various bands gives a point like those shown in Fig. 6 for vs. the uncorrected . A corresponding set of points is computed for each band, but in each case as a function of . (This choice of the ratio of 490 to 555 nm for the independent variable traces back to SeaWiFS, for which these were the most trustworthy bands.) A best-ﬁt function to the set of points so generated is then found for each of the vs. functions. 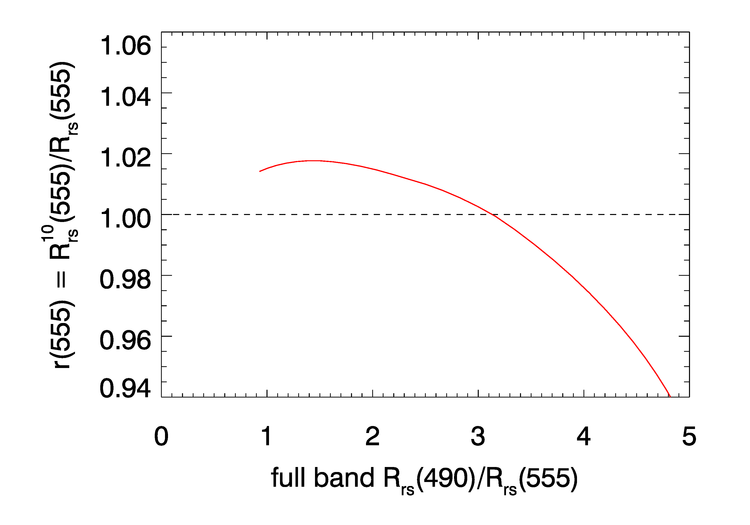 Figure 6: Out-of-band correction factor for the SeaWiFS 555 nm band as a function of the ratio of the uncorrected to .

These functions are then used to apply the OOB correction to the measured values as follows. Given the measured full-band (uncorrected) , the value of is used to evaluate the functional ﬁt to the points of Fig. 6 in order to obtain the correction to be applied to the value. The corresponding functions for the other bands are used to correct those bands. For example, the ﬁt to vs. is used to correct the 412 nm band, and so on. If the value is outside the range of the points used for the data ﬁt as illustrated in Fig. 6, the value of the nearest point is used, rather than extrapolating with the ﬁtting function beyond the range of the underlying data.

The functions were developed using a Case 1 model for as shown in Fig. 4. Case 2 waters can have much diﬀerent spectra and therefore should have diﬀerent OOB corrections. However, in practice, Case 2 waters have the same correction applied as for Case 1 waters.

A ﬁnal comment is warranted regarding the use of this out-of-band correction when comparing satellite-derived and in-situ measurements of (e.g, when doing vicarious calibration):

Performing the OOB adjustment is the default for processing imagery at OBPG. Therefore, if a user wants to compare satellite data with unﬁltered hyperspectral data as in the third bullet above, the standard Level 2 ﬁles cannot be used. The user would need to begin with the Level 1b TOA radiances, disable the OOB correction in the atmospheric correction software, and reprocess the TOA radiances to Level 2.