This page links to the extensive data ﬁles of the surface reﬂectance factors described in Mobley (1999) and Mobley (2015). The ﬁrst paper discusses the problems inherent in estimating the remote-sensing reﬂectance from measurements of the sky and ocean radiance made from just above the sea surface. That paper used Cox-Munk sea surfaces and unpolarized ray tracing to compute factors, which are given as the original table below. The second paper used sea surfaces generated from wave variance spectra and Fourier transforms, and polarized ray tracing, to re-evaluate the numerical values of the factors to account for the eﬀects of polarization and sea surface elevation (wave shadowing). The recomputed values are given in the revised table. The comments below assume familiarity with these papers.

The original 1999 table gives values as a function of wind speed (0 to 14 m/s), sun zenith angle (0 to 80 deg), and viewing direction (10 deg in nadir angle and 15 deg in azimuthal angle ) for clear sky conditions at 550 nm. The revised 2015 table is similar. The values of the revised table are based on better sea surface simulations and account for polarization eﬀects, but only for a single-scattering Rayleigh sky. Such a sky is at best an approximation to an extremely clear sky.

It must be remembered that values vary—sometimes very little, but sometimes a lot—with wavelength. (HydroLight users can ﬁnd the values in the last column of the printout labeled “Radiances Just Above the Water Surface.”) A few percent variation over visible wavelengths is expected from the wavelength dependence of the water real index of refraction. However, still varies even in a HydroLight run using a constant index of refraction (e.g., 1.34). The question thus arises, “How can vary with wavelength if the real index of refraction is constant, since describes how the sea surface reﬂects radiance, and the surface reﬂectance properties (i.e., the Fresnel reﬂectance) are determined by the index of refraction?” The answer lies in the observation that is not an inherent optical property of the sea surface.

The sky radiance distribution changes as a function of wavelength. In particular, the ratio of background sky to direct solar irradiance changes in the RADTRAN model that is used within HydroLight, even if the angular pattern stays the same. This means that there are diﬀerent amounts of sun glitter being seen by the sensor at diﬀerent wavelengths, all else (viewing geometry, wind speed, etc.) being the same. That in turn means that will have some wavelength dependence because the sky radiance changes even though the surface reﬂectance properties are the same at each wavelength.

This can be veriﬁed with a couple of HydroLight runs. Figure 1 shows as a function of wavelength for two viewing geometries. The wind speed was , the Sun was at 30 deg in a clear sky, and the water was Case 1 with a chlorophyll concentration of . For this high sun angle and a nadir viewing direction (looking straight down), there is a signiﬁcant amount of sun glitter within the instrument ﬁeld of view. The amount of sun glitter depends on wavelength because the sky conditions depend on wavelength; thus varies by a factor of two between 350 and 800 nm. For the optimum viewing geometry, there is almost no sun glitter seen by the instrument, and is essentially independent of wavelength. 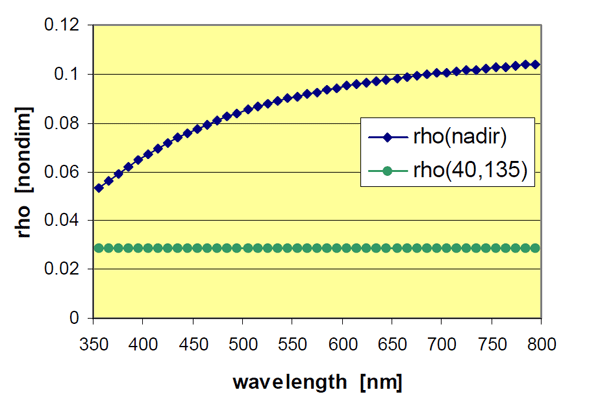 Figure 1: Example values as a function of wavelength. The sun is at a zenith angle of 30 deg in a clear sky; the wind speed is . The blue points are for nadir viewing; the green points are for the optimum viewing geometry of ( = 40 deg, = 135 deg).

The main purpose in writing the 1999 Applied Optics paper was to point out that is not an inherent optical property of the sea surface (as is the Fresnel reﬂectance), and that it’s really hard (actually impossible) to know what value to use in a particular situation. All you can do is make an educated guess and hope for the best. Fortunately, educated guesses often work pretty well if you’re careful to avoid sun glitter and cloud reﬂectance in partly cloudy skies.

Anyone using to remove surface glint to estimate the remote-sensing reﬂectance should read the paper by Lee et al. (2010), which discusses wavelength dependence.