This page develops a new IOP model for Case 1 water based on recent publications on absorption and scattering in Case 1 waters. In this model all IOPs are determined by the chlorophyll value (after selecting low, medium, or high ultraviolet absorption). This model is presumably an improvement over previous models, although that remains to be proven by comparison with comprehensive measurements. In any case, the inherent limitations of IOP models must be remembered (in particular, see Mobley et al. (2004) for limitations of the ”Case 1” concept). IOP models may be very good on average, but may or may not be (very often, deﬁnitely are not) correct in any particular instance. IOP models are therefore best used for ”generic” studies. When modeling a particular water body, especially in a closure study, it is always best to use measured data to the greatest extent possible. 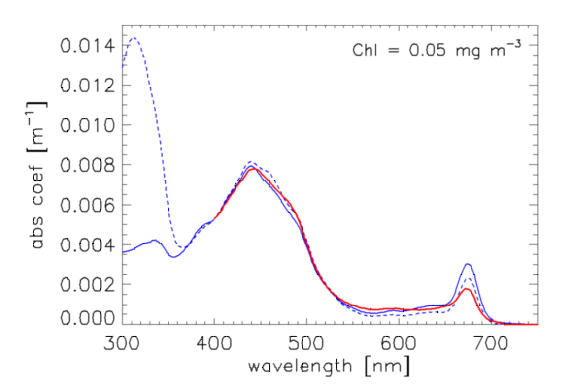 Vasilkov et al. (2005) present spectra for and and between 300 and 400 nm, as derived from absorption measurements in coastal California waters. Figure 2 shows their and spectra compared with those of Bricaud et al. (1998). The diﬀerences at 400 nm reﬂect the diﬀerent databases (i.e., diﬀerent waters) used to derive the coeﬃcients. 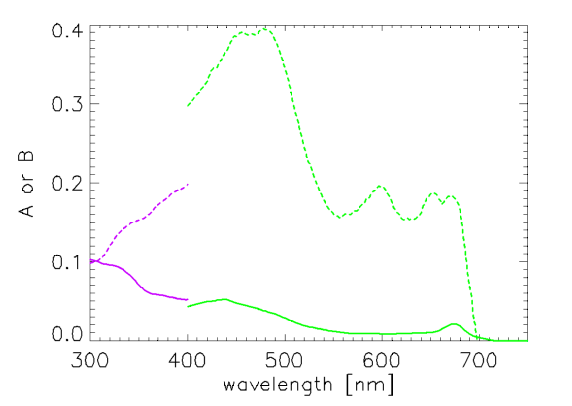 Desperation is the mother of modeling (you can quote us on that), so to deﬁne and over the 300-1000 nm range, proceeded as follows. The Bricaud et al. A and B curves are accepted for use from 400 to 720 nm, with A = B = 0 between 720 and 1000 nm. The Vasilkov et al. curve for A was normalized to the Bricaud value at 400 nm, i.e., , where subscripts v and b stand for Vasilkov et al. and Bricaud et al., respectively. The normalized was then averaged with the two normalized spectra of Morrison and Nelson seen in Fig. 1, assuming that the A spectra have the same shape as . This assumption about the shapes of A and is correct only if B = 0 or if Chl = 1, in which case in Eq. (1). The resulting average A between 300 and 400 nm then merges smoothly with the A of Bricaud at 400 nm. For B, the Vasilkov et al. curve was normalized to the Bricaud et al. curve at 400, and the result was used to extend the Bricaud et al. B down to 300 nm. The resulting A and B spectra are shown in red in Fig. 3, along with the three A spectra used to compute the average A between 300 and 400. These A and B give an absorption model that roughly corresponds to the mid-range of UV absorptions seen in the Morrison and Nelson data. The new Case 1 IOP model uses these A and E = 1 - B as the default spectra for the last version of Eq. (1). The tabulated A and E spectra are on ﬁle AEmidUVabs.txt. 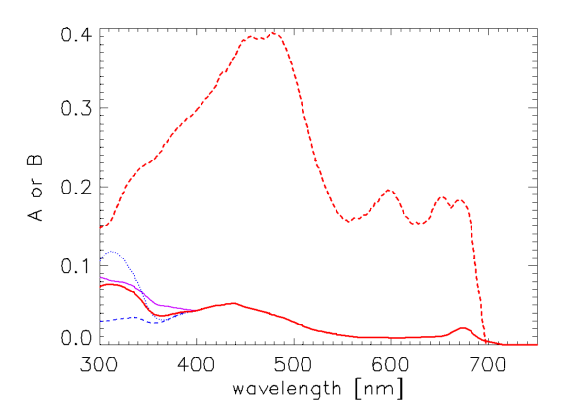 Figure 3: Fig. 3. The A (red solid line) and B (dashed line) spectra used in Eq. (1) to deﬁne for the mid-range of UV absorption. The purple and blue curves were averaged to produce A between 300 and 400 nm. 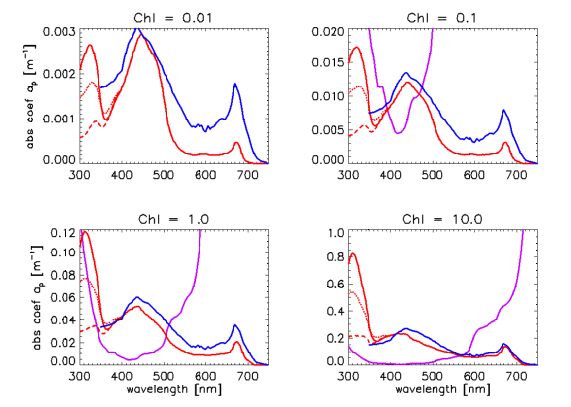 CDOM absorption. Figure 5 shows measured CDOM absorption spectra down to 200 nm at several locations in Florida waters on both log and linear ordinates (data of Dr. Lore Ayoub, personal communication). For wavelengths greater than 300 nm, these spectra are acceptably well modeled by a function of the form of Eq. (3):

The red line in Fig. 5 shows the spectrum predicted by Eq. (2) with , and the average (for the spectra shown) of . This value of S was determined from the average values of at 300 and 440 nm. The functional form (2) is used to model CDOM absorption down to 300 nm. This model underestimates CDOM absorption at shorter wavelengths and therefore should not be used below 300 nm. When incorporated into the new Case 1 IOP model, is set to , with default values of , , and just as in the classic Case 1 model. However, other values of , , and S can be used if desired. 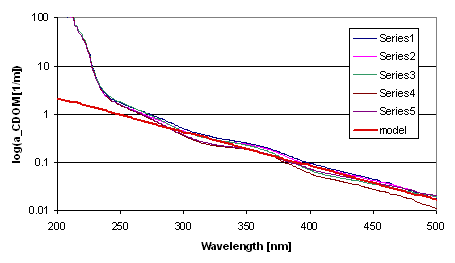 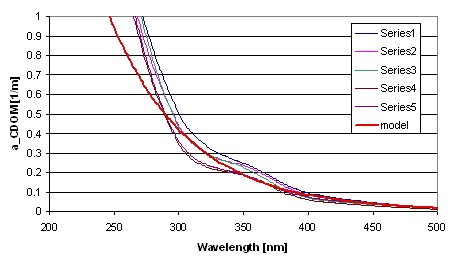 Thus the wavelength dependence of the scattering coeﬃcient depends on the chlorophyll concentration. In particular, now lies between -1 and 0. A value of = -1, as often used in earlier models, is known from Mie theory to be valid only for nonabsorbing particles with a Junge particle size distribution slope of -4.

Loisel and Morel (1998) studied the relationship between particle beam attenuation at 660 nm, , and the chlorophyll concentration. They found the functional form

However, a power law in wavelength of the form of Eq. (3) generally gives a better ﬁt for than for (e.g., Voss (1992); Boss et al. (2001c) ). Thus it is probably better to model and then obtain from (with being determined by Eq. (1) as described above). This is the approach taken in the new Case 1 model, which uses

Figure 6 shows example for mid-range UV absorption, , and spectra for near-surface waters ( = 0.416 and n = 0.766 in Eq. 5), along with the ”classic” with = 0.3, n = 0.62, and m = 1. The scattering coeﬃcients are not too diﬀerent at low chlorophyll values, but the new has a diﬀerent wavelength dependence and is much larger in magnitude, by up to a factor of three, at high Chl values. Unlike in the classic scattering model, the wavelength dependence of now depends on Chl and is more complicated. These diﬀerences in scattering will have a signiﬁcant eﬀect on computed radiances. 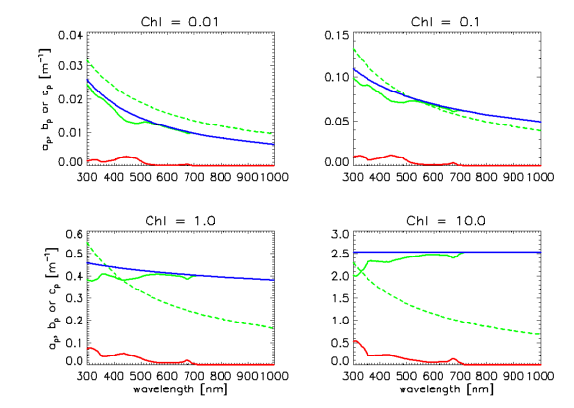 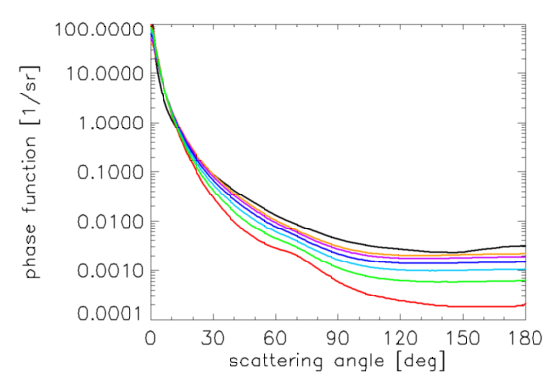 To illustrate the quantitative diﬀerences (including the combined eﬀects of absorption and scattering coeﬃcients and the particle scattering phase function) between the classic and new Case 1 IOP models, Fig. 9 shows the remote-sensing reﬂectance for homogeneous, inﬁnitely deep waters with Chl = 0.01, 0.1, 1, and 10 , as computed for the classic and new Case 1 IOP models. The mid-range UV absorption model was used in the new model. The sun was placed at a zenith angle of 30 deg in a clear sky with typical marine atmospheric parameters (sky irradiances were computed using the RADTRAN-X sky irradiance model). The wind speed was 6 m/s. For the classic IOP model, the particle phase function was taken to be a Fournier-Forand phase function with a backscatter fraction as given by the empirical formula 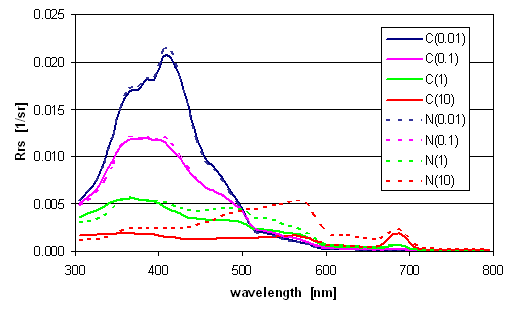 Comments for A New IOP Model for Case 1 Water: