Aerosols are solid or liquid particles that are much larger than gas molecules but small enough to remain suspended in the atmosphere for periods of hours to days or longer. Typical sizes are 0.1 to . An aerosol’s optical properties are determined by its composition, usually parameterized via its complex index of refraction, and its particle size distribution (PSD).

A similar equation holds for the cumulative number distribution , where is the number of particles per volume of space with size less than or equal to . The corresponding parameters and can be obtained from and ; see the equations in Ahmad et al. (2010). The particle size distribution (PSD) is given by

where is the number of particles per unit volume in size range to . The units for are usually expressed as .

Figure 1 illustrates shapes of the volume , number , and particle size distributions for an open ocean aerosol, computed using the parameter values of Table 2 of Ahmad et al. (2010). The distributions of the ﬁne aerosols are given by the green lines. The blue lines are the coarse aerosols, and the red lines are the sums. The two roughly comparable distributions of left panel of the ﬁgure show that the ﬁne and coarse aerosols each contribute a signiﬁcant amount of the total particle volume. In the present example the ﬁnes are 25.7% of the total volume and the coarse particles are 74.3% of the total volume. The middle panel shows that the ﬁnes dominate the number of particles; in the present case there are 477 times as many ﬁne particles as coarse. The right panel shows the PSD. The black dashed line shows the -4 slope of a Junge distribution for comparison.

Figure 1: Illustration of aerosol volume, number, and particle size distributions. The parameter values are for an open-ocean aerosol. The green curve is ﬁne particles; blue is coarse particles; red is the sum of ﬁne and coarse particles. Each total curve is normalized to 1 at its maximum value.

The radius parameter and index of refraction both depend on the aerosol type (dust, sea salt, soot, etc.) and on the relative humidity . The index of refraction generally depends on wavelength. Figure 2 shows the eﬀect of relative humidity on cumulative volume and particle size distributions for an open-ocean aerosol (parameter values from Table 4 of Ahmad et al. (2010)). Note that as increases, the particles absorb more water and increase in size, so the distributions shift to the right. The shape of the distribution also changes with .

Figure 2: Eﬀect of relative humidity on the cumulative volume and particle size distributions for a typical open-ocean aerosol. The curves in each panel are normalized to 1 at the maximum value of the three curves.

where is the surface elevation. (Generally for mean sea level, but may also be the elevation of a lake.)

For all else held ﬁxed, the aerosol optical thickness at wavelength is approximately related to the value at a reference wavelength by

The single scattering albedo deﬁned by

is also of use in modeling the optical eﬀects of aerosols on the radiance distribution.

Ahmad et al. (2010) constructed look-up-tables (LUTs) for 10 aerosol types and 8 relative humidities, for a total of 80 aerosol tables. The ﬁne fraction was a mixture of 99.5% dustlike and 0.5% soot particles (not modeled by Shettle and Fenn) for all 10 aerosol types, which gives good agreement on average with AERONET measurements of aerosol optical properties. The ten aerosol models have diﬀerent weights of ﬁne and coarse particles, but the eﬀective radius () and mean radius () are the same. The aerosol types were then deﬁned by letting the ﬁne-to-coarse fraction vary from 0 to 1. For each aerosol type, relative humidities of = 30, 50, 70, 75, 80, 85, 90, and 95% were used. The actual aerosol LUTs contain the components of the model from which to derive single-scattering aerosol reﬂectance ratios in each band (relative to any reference band), plus a set of quadratic coeﬃcients relating single to multiple scattering (as in Gordon and Wang (1994a)), plus a separate table of Rayleigh-aerosol diﬀuse transmittance coeﬃcients of the form (recall Eq. (6) of the Atmospheric Transmittances page). Mie is theory used to compute the aerosol phase functions for use in the radiative transfer model.

The algorithm developed by Gordon and Wang (1994a) is used, although the original aerosol models and LUTs have been updated as described in Ahmad et al. (2010), and model selection is now partitioned by relative humidity (). (Gordon and Wang ignored the glint term since they were considering SeaWiFS, whose viewing direction was chosen to avoid direct Sun glint.)

Beginning with Eq. (13) of the Normalized Reﬂectances page,

Assume that the corrections for Rayleigh, whitecaps, , , and Sun glint have all been made. Then the left hand side of

is known. Here is just convenient shorthand for the measured TOA reﬂectance with the Rayleigh and other eﬀects removed. The next task is to compute , the combined aerosol and aerosol-Rayleigh reﬂectance, and move it to the left hand side, after which the desired will be known.

Low-chlorophyll, Case 1 waters have negligible water-leaving radiance at near-infrared (NIR) wavelengths, i.e. beyond roughly 700 nm. For such waters, it can be assumed that , which is known as the ”black-pixel” assumption. Let and be two NIR wavelengths, with . At these two wavelengths, the TOA normalized reﬂectance (corrected as shown in Eq. (3)) is due entirely to atmospheric path radiance: . Table 1 shows the and bands for several sensors. 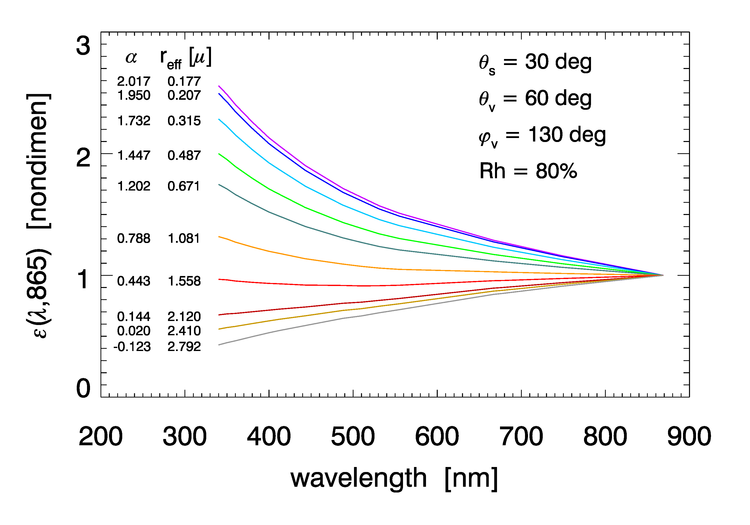 Figure 3: Dependence of on aerosol model. The aerosol model is determined by the value of the Ångström exponent and the eﬀective particle size . All curves are for a particular sun zenith angle , viewing direction , and relative humidity , as shown.

For the given image pixel being corrected, the process is as follows:

Recall that is the diﬀuse transmission in the viewing direction, and that is the contribution of water-leaving radiance (in reﬂectance form) at the TOA. The desired at the sea surface is thus obtained from

The aerosol optical depth is computed at all wavelengths using the values of and the Ångström exponent in Eq. (1).

Note that these are unrelated assumptions: the water can have non-zero NIR reﬂectance and the atmosphere can have non-absorbing aerosols, or there can be zero NIR reﬂecance but absorbing aerosols. If the water-leaving radiance is not zero at the reference wavelength, then the contribution to will be interpreted as a larger aerosol concentration. This leads to over-correction for the aerosol, i.e, subtracting too much from . The resulting is then too small, and can even be negative at blue wavelengths. Likewise, if the aerosol is blue-absorbing, over-correction occurs at blue wavelengths and, again, is too small or even negative at blue wavelengths. 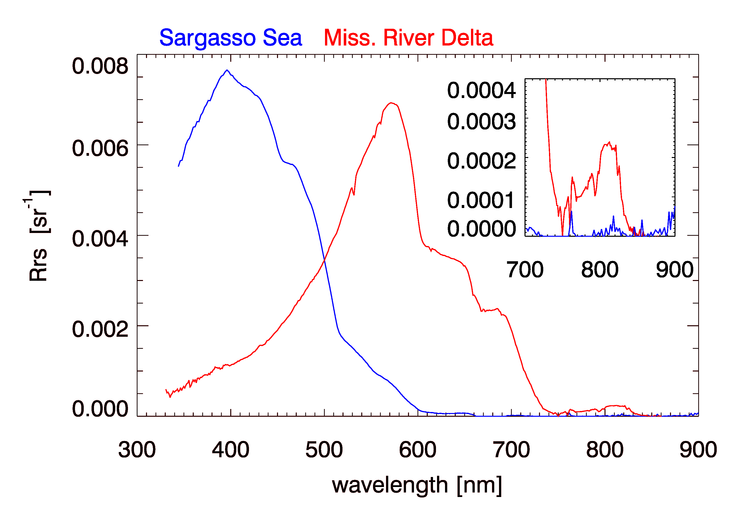 Figure 4: Examples of Rrs for Case 1 and Case 2 waters. Rrs is not zero in the NIR for the Mississippi River Delta water. 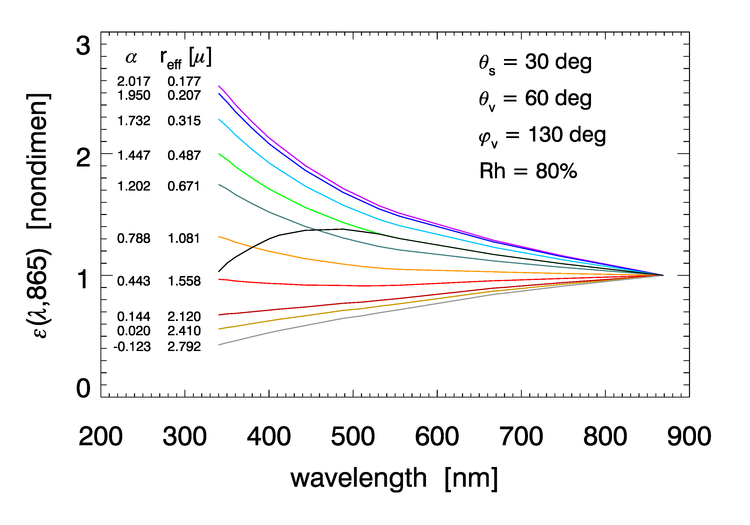 Figure 5: Qualitative behavior of for a blue-absorbing aerosol (black curve).

Many ways to treat non-black pixels have been developed; the method currently implemented by the OBPG is described in Bailey et al. (2010). This algorithm works as follows.

It is necessary to estimate (or equivalently ) at the NIR reference wavelengths so that the non-zero water-leaving radiance can be removed from the TOA signal, leaving only the aerosol reﬂectance as the contribution to , from which the aerosol type (i.e., ) can be determined. However, can’t be estimated until the aerosol contribution is removed. Thus an iterative solution must be used to obtain both and the aerosol type.

The remote-sensing reﬂectance can be written

As discussed in detail on the Normalized Reﬂectances page, the factor describes the angular distribution of the water-leaving radiance, i.e., the BRDF of the ocean. This factor depends on the Sun and sky radiance distribution (parameterized by the solar zenith angle and AOT ), water-column IOPs (parameterized by the chlorophyll concentration in Case 1 waters), sea state (wind speed ), viewing direction (), and wavelength. It has been extensively studied and numerically modeled by Morel et al. (2002), who present tabulated values as functions of , and . Although the Morel et al. (2002) table was generated for Case 1 waters, analysis shows (Bailey et al. (2010)) that it is often adequate for Case 2 waters as well. The factor is thus considered known for the present calculations.

The iterative correction for waters where the black-pixel assumption cannot be made has the following steps:

where the is the absorption by pure water.

where . is computed in the same manner using .

8.
Use this and to get from Eq. (9). Similarly, compute using and .
9.
Use the new, non-zero value of (i.e. ) to remove the non-zero contribution to . Do the same calculation for 865 nm.
10.
Return to Step 2 and repeat the atmospheric correction using the black-pixel algorithm. This will give a new (hopefully better) estimate of , thus an new estimate of the other parameters, and ﬁnally new estimates of and at Step 8. After using the new values of and to correct for the non-zero water contribution to and , return to Step 2 for a new iteration. Continue iterating until the change in from one iteration to the next is less than 2%, which typically takes 2-4 iterations, or when 10 iterations have been made.

If this iteration process fails to converge within 10 cycles, then re-initialze with , i.e., set the NIR aerosol contribution to zero. This implies that all of the NIR reﬂectance is due to the water (after correction for Rayleigh and Sun glint). Repeat the iteration until convergence is reached. If convergence is still not reached, do one more calculation with and ﬂag the pixel as ”atmospheric correction warning.” However, even in this case, the retrieval may still be useful. 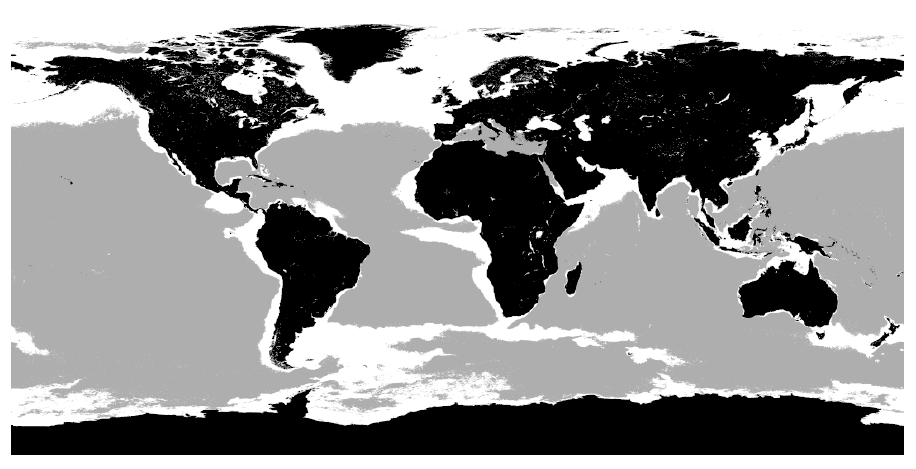 Finally, rather than the exact NIR reference wavelengths of and shown above, in practice band-averaged IOP values are used for the particular sensor. Thus for VIIRS-NPP, the reference bands are centered at 745 and 862 nm, with the band-averaged , and so on. Band averaged IOPs for diﬀerent sensors are given at NASA ocean color documents.

The aerosol models of Ahmad et al. (2010) discussed in Section include a small fraction of absorbing soot for the ﬁne part of the aerosol size distribution. These aerosol models are used for routine correction for aerosols. These models, however, cannot account for the presence of strongly absorbing aerosols, which frequently occur in coastal regions downwind from continents, and even in mid-ocean regions because winds can transport ﬁne dust particles long distances.

Strongly absorbing aerosols (especially at blue wavelengths) have been a topic of much research over the years, e.g., Gordon et al. (1997b). However, as was illustrated in Fig. 5, there is no reliable way to detect the presence of absorbing aerosols from the NIR bands of Table 1 during the atmospheric correction process. Therefore, all pixels are processed using the algorithms for non- or weakly absorbing aerosols as described in the previous sections.