The bi-directional reectance distribution function (BRDF), which tells us everything we need to know about how a surface reﬂects light. As the name suggests, the BRDF describes how light incident onto a surface in any incident direction is reﬂected into any reﬂected direction. As explained on the BRDF page, this function in general depends on the incident directions , reﬂected directions , and wavelength (and in general on the state of polarization, which is ignored for the moment). If we could always measure or model the complete BRDF of a surface the problem of specifying surface boundary conditions in radiative transfer simulations would be solved. However, measuring even a partial BRDF for a few values of is a diﬃcult and tedious task in the laboratory and is almost never attempted in the ocean. Of course, everyone wants to have some easily made (compared to a BRDF) measure of surface reﬂectance that, with appropriate assumptions, can be used to describe the optical properties of the surface. This leads us to various other reﬂectances and quantities derived from the BRDF.

There are many deﬁnitions of “albedo.” Hapke (1993) deﬁnes bolometric, Bond, geometric, hemispherical, normal, physical, plane, single-scattering, and spherical albedos, as well as an albedo factor. Not a single one of these albedos corresponds to how albedo is deﬁned in Light and Water (1994) (page 193) and commonly used in optical oceanography. Fortunately, oceanographers do not have to deal with all of these albedos, but we should clarify a point that can cause confusion when reading papers on reﬂectance, which sometimes just say, “...and the albedo is...” without telling you which one they are using.

Optical oceanographers generally think of the albedo as being the ratio of the upwelling plane irradiance to the downwelling plane irradiance, for whatever conditions of incident lighting you have in nature at the time of measurement. (This is how the albedo is deﬁned in Light and Water.) This is what you need to know to compute an energy balance in the ocean, for example. Thus the oceanographers’ albedo is the same as the irradiance reﬂectance .

Many surface-reﬂectance scientists (e.g., in the paint industry) like to deﬁne their albedos and reﬂectances in terms of isotropic illumination of the surface, i.e., the incident radiance ) is a constant independent of . For isotropic incident radiance, the general equation for the irradiance reﬂectance (see the page on Lambertian BRDFs)

This quantity is called the Bond or spherical albedo, or the spherical or bi-hemispherical reﬂectance, or just the albedo, depending on the author’s preference. Note that this is not equal to unless the incident lighting is isotropic (which never occurs in nature) or unless the surface is Lambertian (which never occurs in nature). For a Lambertian surface, , where is the reﬂectivity of the surface.

The same convention of assuming isotropic illumination of the surface is often used when deﬁning other reﬂectances, e.g., the hemispherical-directional reﬂectance. Note that the convention of using isotropic illumination when deﬁning albedos and reﬂectances is not necessarily bad: it removes a complicating factor—variable incident lighting—from the discussion of surface properties. However, oceanographers cannot control their incident lighting; they have to live with whatever incident radiance nature gives them.

has the same units as the BRDF, but they are not the same thing. Note in particular that uses the downwelling radiance from all directions (as contained in ), whereas the incident radiance in the deﬁnition of the BRDF is in a collimated beam. [Also, some people call this ratio the “remote-sensing reﬂectance” only if the measurement is being made just above the sea surface and is the water-leaving radiance (the total upward radiance minus the surface-reﬂected sky radiance). If measured in water, the ratio of upwelling radiance to downwelling irradiance is then called the “remote-sensing ratio.”]

The reﬂectance factor REFF (also called the reﬂectance coeﬃcient) is deﬁned as the ratio of the BRDF of a surface to that of a perfectly diﬀuse surface under the same conditions of illumination and observation. “Perfectly diﬀuse” means a Lambertian surface with . Thus

The radiance factor RADF is deﬁned as the reﬂectance factor for normal illumination, i.e., for . Thus

The Fresnel reﬂectance is the reﬂectance of a perfectly smooth surface between two media of diﬀerent indices of refraction . Formulas for are given in almost any optics text, and in Light and Water (1994, page 157). Figure 1 gives for unpolarized light incident onto either side of an air-water surface; the water has a real index of refraction (relative to the air) of . 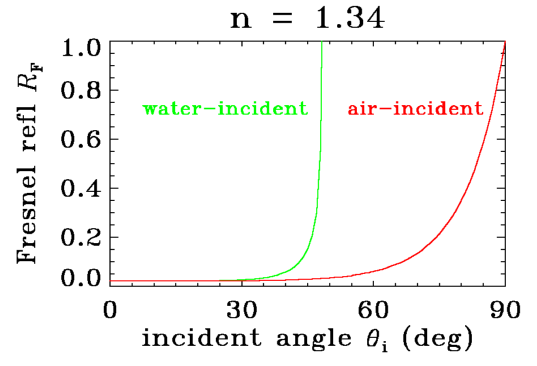 can be combined with Dirac delta functions to create a BRDF. Consider the BRDF

Inserting Eq. (1)into the general equation for reﬂected radiance (Eq. (4) of the BRDF page),

This last equation is the form usually seen in the deﬁnition of the Fresnel reﬂectance as being the ratio of reﬂected to incident (ir)radiances for angles related by the law of reﬂection.

Comments for Measures of Reflectance: