Suppose you are looking toward a light source, or “into the beam.” In the simplest case, called linear (or plane) polarization, the electric ﬁeld lies in, or oscillates in, a ﬁxed plane. The animation below illustrates how the electric ﬁeld varies with time as the light wave passes through a ﬁxed reference plane normal to the direction of propagation. (Animation from https://en.wikipedia.org/wiki/Polarization_(waves)) For visible wavelengths, these oscillations are at a frequency of around times per second and cannot be directly measured because of instrumentation limits. 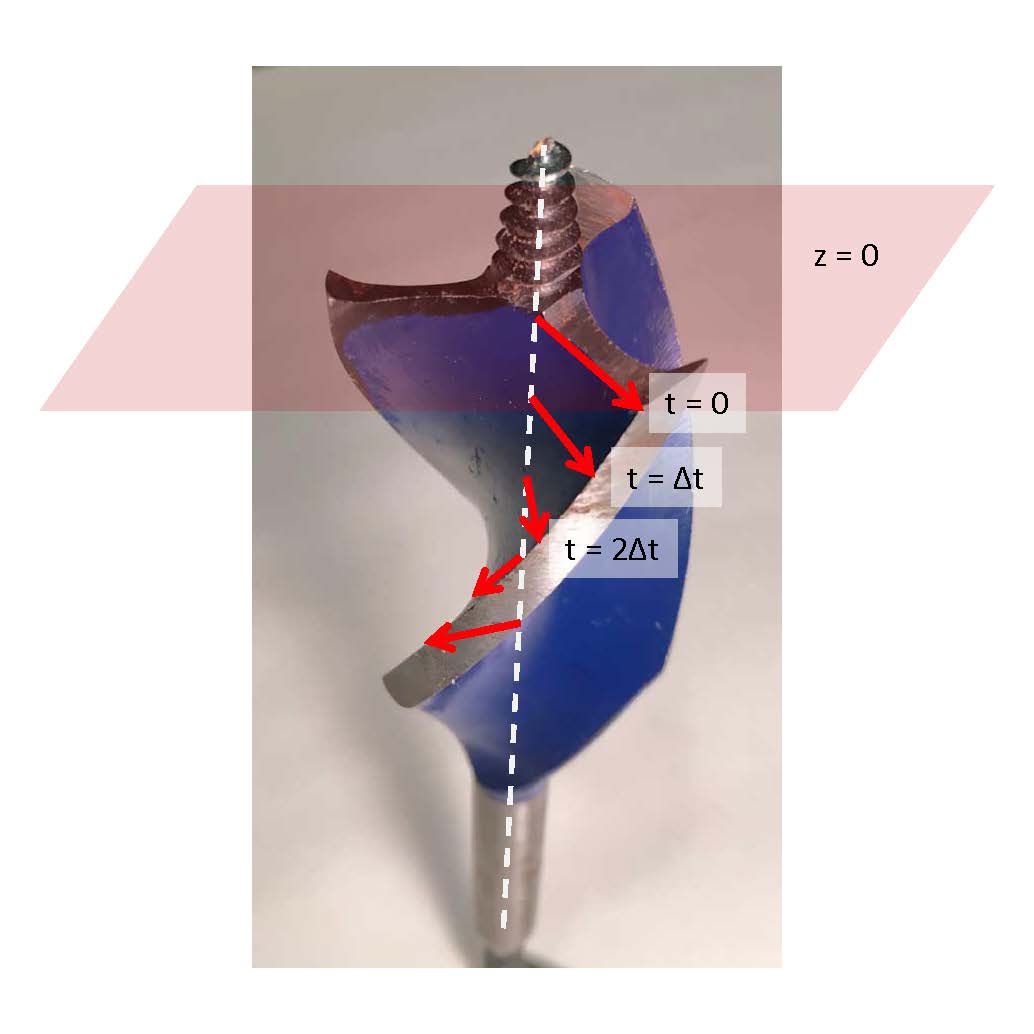 Figure 1: A right-hand-twist drill bit as an analogy to right-circular polarization. The edges of the bit are right-handed helices, and as the bit cuts into material, each cutting tip traces out a right-handed helix. If the bit is moved upward, without rotation, through the plane at , the intersection of the cutting edge and the plane at appears to rotate clockwise when viewed looking into the beam.

Note that the description of the electric ﬁeld as rotating clockwise or counterclockwise depends on whether you are looking into the beam or along the beam. However, the concept of right-handed vs. left-handed helices is independent of the viewing perspective. The deﬁnition just described—RCP corresponds to clockwise electric ﬁeld rotation in a reference plane when looking into the beam as the light propagates through the plane, and to the pattern of electric ﬁeld vectors lying along a right-hand helix in space—is what is used by Bohren and Huﬀman (1983) and Hecht (1987). I personally like that convention because I can remember the analogy with the moving right-hand-helix drill bit. However, others (e.g., Kattawar (1994) and Jackson (1962)) use the opposite convention of RCP meaning that the electric ﬁeld appears to rotate counterclockwise with looking into the beam (or clockwise looking along the beam); in this choice LCP corresponds to a right-handed helix. The convention for how to deﬁne RCP vs LCP often seems to depend on the ﬁeld of the user—physics vs. astronomy vs. chemistry, etc. Fortunately it does not matter which one you use, so long as you make a choice and stick with it during the solution of your problem. Problems arise only if you compare your results with someone else’s results, in which case diﬀerent descriptors like parallel vs. perpendicular and right vs. left may be referring to the same thing by diﬀerent names.

The animation below (from https://en.wikipedia.org/wiki/Circular_polarization shows the propagating electric ﬁeld of RCP light as deﬁned here, but that page calls it LCP, which was the choice for the creator of that Wikipedia page.

We now need a quantitative way to specify the state of polarization of light. This is given by the Stokes vector, which is an array of four real numbers usually written as

Note that is just an array with four elements; it is not a vector in the geometric sense.

To deﬁne the Stokes vector, ﬁrst pick an coordinate system that is convenient for your problem. In a laboratory setting, this system might have parallel to an optical bench top, perpendicular to the bench top, and in the direction of propagation. In this lab setting, might then be called the “parallel” (to the bench top) direction, and would then be the “perpendicular” direction. Or and might be called “horizontal” and “vertical”, respectively. The Level 2 page on scattering of polarized light shows another coordinate system commonly used in oceanography.

The electric ﬁeld vector in this coordinate system is resolved into x and y components as , where the components and depend on position and time. For light propagating in a vacuum, the electric ﬁeld is transverse to the direction of travel, so the z component of is zero. If the light is linearly polarized in the x plane, then and . For linear polarization in the y plane, and . 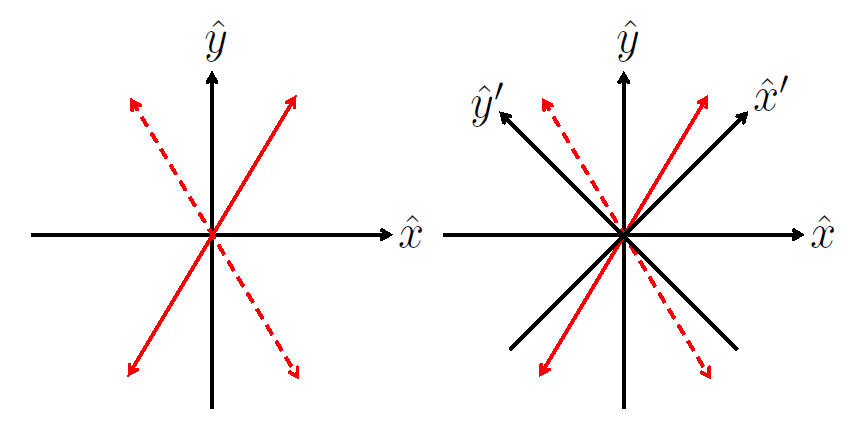 The state of linear polarization can be uniquely speciﬁed by the choice of a second set of axes, , chosen at a 45 deg angle to the axes, as shown in the right panel of Fig. 2. The solid and dashed red arrows have diﬀerent projections on the axes and are thus distinguished. The Stokes parameter is non-zero for planes of polarization like the red arrows in the ﬁgures and is deﬁned by

The Stokes parameters and together specify the state of polarization if the light is linearly polarized. Another parameter, , is needed to specify the state of circular polarization. The time-averaged amounts of right and left circularly polarized irradiance, call them and respectively, can be measured by use of circular polarizers. The component is then deﬁned as their diﬀerence:

Finally, consider the case of randomly polarized light. All of the above time averages will be equal because of the rapid ﬂuctuations of the electric ﬁelds with all directions and helicities, in which case . To account for this case, let be the total irradiance without regard for the state of polarization. This is measured without the use of any polarization ﬁlters in the beam. This is also given in terms of the time averages by

is always positive and equal to the total irradiance.

It is important to note that the values of the and parameters depend on the choice of the axes, but the values of and are independent of this choice. In the coordinate system described above, the axis is parallel to the horizontal laboratory bench top, and is perpendicular to the bench top. As noted, it is common to refer to the corresponding polarizations as being “parallel” or “horizontal” and “perpendicular” or “vertica”, respectively. Terms like parallel and perpendicular or horizontal and vertical always refer to some reference plane—the bench top in this case. However, a diﬀerent choice of the reference plane changes the meaning of these terms. One person’s parallel polarization can be another person’s perpendicular polarization. You have to ﬁgure out the meanings on a case by case basis for whatever reference coordinate system is being used.

If the beam is perfectly polarized (in whatever state of polarization), then

If the beam is unpolarized, or is a mixture of polarized and unpolarized light, then this relation becomes an inequality:

The degree of polarization, expressed in percent, is deﬁned by

The degree of linear polarization is deﬁned by

and the degree of circular polarization is deﬁned by

DoCP is positive for RCP and negative for LCP. These measures of the degree of polarization do not depend on the choice of coordinate system.

The deﬁnitions of , and above were made in terms of measurable irradiances. There is much more that can be said, in particular about the theoretical formulation of the Stokes vector in terms of the solution of Maxwell’s equations for a propagating wave. An excellent and entertaining presentation of those details is given in Chapter 7 of Bohren and Clothiaux (2006). Suﬃce it to say that in discussions of Stokes vectors you may see them deﬁned by equations such as

The ﬁrst form of deﬁnition is in terms of irradiances as discussed above, with an obvious change in notation to show the orientations of the polarizing ﬁlters in the chosen coordinate system. The second form is written in terms of the complex, time-dependent, electric ﬁeld vectors after describing the light beam in terms of a plane-wave solution to Maxwell’s equations. Thus , etc. The notation indicates the time average of the argument. After the time averages are taken, the magnitudes etc. are left, and there is an additional factor of resulting from the average of products of the sinusoidal electric ﬁelds over a wave period. The ﬁnal form makes clear that the Stokes parametes are real numbers. The discussion of Eq. (1) shows that the deﬁnitions in terms of electric ﬁelds still have units of irradiance. The irradiance form is what you will use in the lab; the electric-ﬁeld forms are what you will use for theory.

Table 1 shows the pattern of Stokes parameters for various states of polarization.