The preceding pages have given a detailed look at one-dimensional surfaces. We now consider the more useful case of two-dimensional sea surfaces. The extension to two dimensions is mathematically straight forward.

Even though the mathematical transition from one to two dimensions causes no problems, it is again educational to take a careful look at a couple of contrived examples.

For the ﬁrst example, a sea surface area of size is sampled using and points in the x and y directions. Sea surface elevations were created by drawing a random number at each value.

The upper-left panel of Fig. 1 shows a contour plot of this surface for a particular sequence of random numbers. The spatial periodicity of the Fourier representation is used to extend the contour plot to the full range of the tile, which gives a good visual appearance. Thus the elevations at are the same as those at , those at equal those at , and the elevation at duplicates the elevation at . The grid of sample points is shown by the solid silver dots. The points at and obtained by periodicity are shown by open silver circles at the right and top of the surface plot. 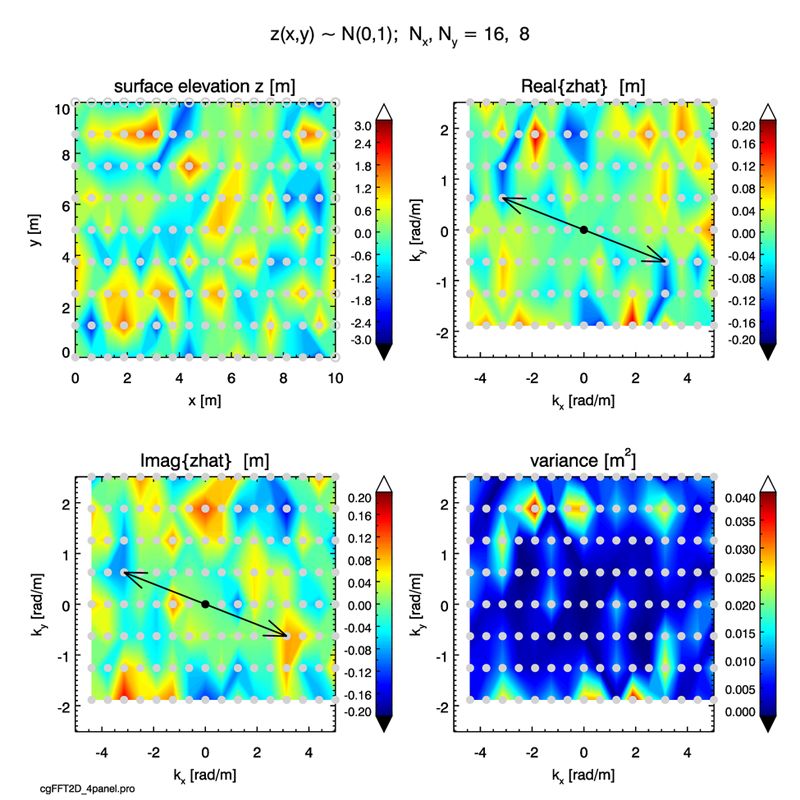 Figure 1: A two-dimensional random sea surface and its Fourier transform and two-sided variance spectrum. The surface elevations in the upper left panel were randomly drawn from a distribution. The black arrows highlight a particular frequency pair. The blue-blue and red-red symmetry of the real part of the Fourier amplitudes, and the red-blue symmetry of the imaginary part, shows the Hermitian nature of the amplitudes. The gray dots show the locations of the discrete values that were contoured to create the ﬁgures.

The Fourier amplitudes are obtained from the 2-D DFT of :

where zhat is the complex 2-D array returned by the FFT routine, and realzhatplot is the 2-D array plotted in the upper right panel of Fig. 1.

The upper right panel of Fig. 1 plots the real part of , and the lower left panel plots the imaginary part. The Nyquist frequency lies along the right side of the contour plot. The Nyquist frequency lies along the top of the contour plot. The white space at the left and bottom highlights that there are no negative Nyquist frequencies. In each amplitude plot a particular pair of values is indicated by the black arrows; the frequency is shown by a black dot. Note that in the plot of the real part, , whereas in the plot of the imaginary part, . The contouring is rather low quality for so few points, but it is easy to see in the digital output that when the is the Nyquist frequency (the points along the right column of points in the plot), the symmetries are given by and . A corresponding relation holds for when (the points along the top row of the plot). The point at the upper right of the plot corresponds to both and being at their respective Nyquist frequencies. As always, the array elements at the Nyquist frequencies must be treated as special cases when writing computer programs. These symmetries show that the 2-D amplitudes are Hermitian: . The discrete 2-D variance spectrum is contoured in the lower right panel of the ﬁgure. Note the symmetry.

For this example, the standard check on the 2-D discrete Parseval’s relation, Eq. (16) on page Fourier Transforms, gives

For a second example, let us deﬁne a surface from a pair of crossing sinusoids as follows:

where as usual and where 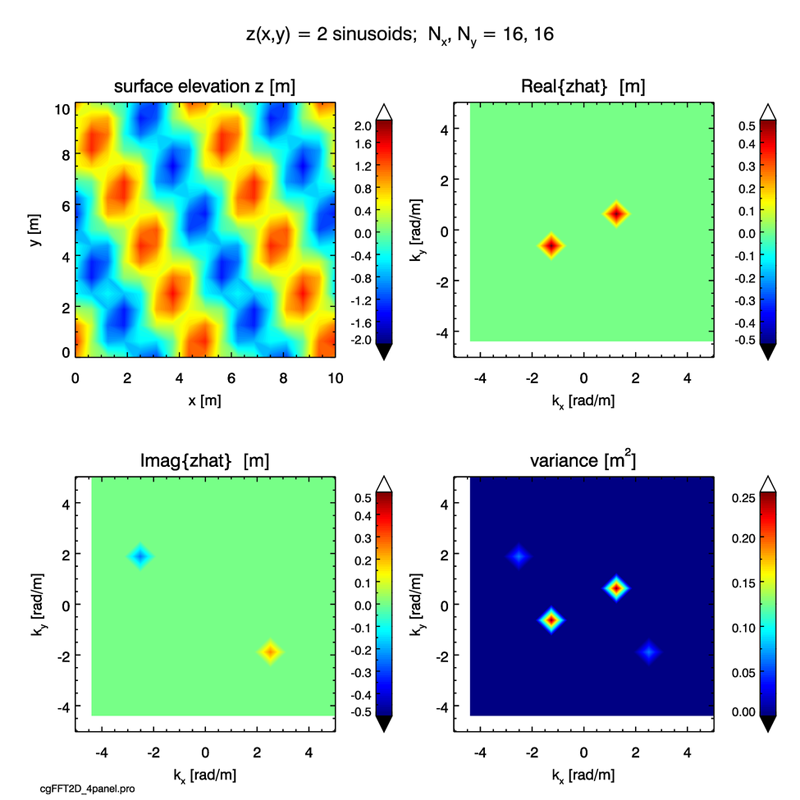 The choice above of in Eq. (2) makes the dominate wave a cosine in our coordinate system, and makes the second wave a sine. As we saw in the 1-D examples, variance associated with cosine waves appears in the real part of the Fourier amplitudes, and the variance in sine waves appears in the imaginary parts. We see this again here for the ﬁrst (cosine) and second (sine) waves of the surface. Since each wave pattern has only one frequency, there is only one pair of points at in the plot of the real part, and one pair at in the plot of the imaginary part. The amplitudes at all other frequencies are zero. The symmetries of these points again show the Hermitian nature of the amplitudes.

For this simple example involving just four frequencies it is easy (from the digital output) to hand check that the right-hand side of the 2D discrete Parseval’s relation, Eq. (18) of the Fourier Transforms page, is

This value agrees exactly with the corresponding sums of the surface elevations, , and variance values, .

Comments for Surfaces to Spectra: 2D: