This page tailors the general ﬂuorescence theory seen on the Theory of Fluorescence and Phosphorescence page to the case of ﬂuorescence by colored dissolved organic matter (CDOM). The goal is to develop the quantities needed for prediction of CDOM ﬂuorescence contributions to oceanic light ﬁelds using a radiative transfer model like HydroLight. For convenience of reference, it is recalled from the theory page that the quantities needed are

where is the absorption by CDOM at a reference wavelength , which is usually taken to be 400 or 440 nm, and is a spectral slope parameter. is usually in the range of 0.016 to , but can vary from 0.007 to 0.026. See Fig. 1 of the IOP models page for further discussion. (As noted on the CDOM page, the elastic scattering coeﬃcient for CDOM is usually assumed to be zero.)

Figure 1 shows a measured spectral ﬂuorescence quantum eﬃciency function for CDOM, , as measured by Hawes (1992) on a sample of water from the Gulf of Mexico on the West Florida Shelf (his station FA7). Other measurements in the Gulf of Mexico, Peru upwelling, and North Atlantic showed similar shapes, although with diﬀerent magnitudes and some variability in the details. 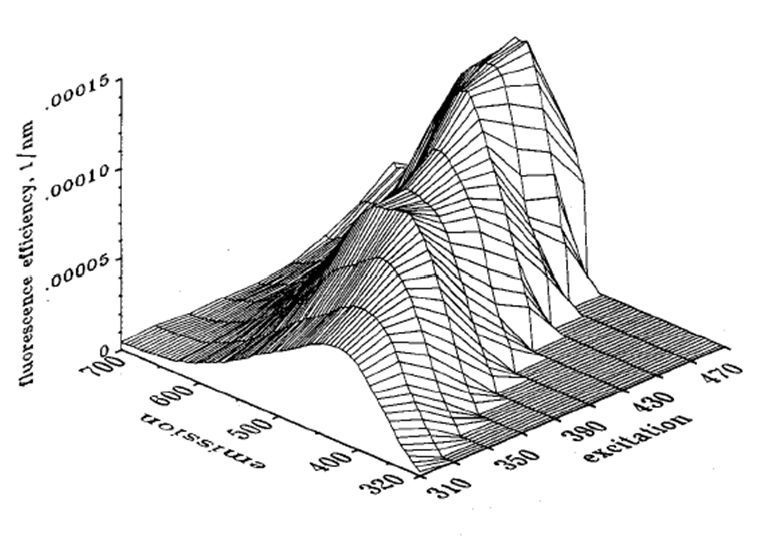 Figure 1: Measured spectral ﬂuorescence quantum eﬃciency function for a sample of water from the Gulf of Mexico (Station FA7 of Hawes (1992)).

Hawes was able to ﬁt his measurements to a function of the form (his Eq. 10)

Here has units of , and are dimensionless, and and have units of . The values of these model parameters are determined by a best ﬁt of the model to the measured data. For the data of Fig. 1, the best-ﬁt values are shown in Table 1.

The left panel of Fig. 2 shows the best-ﬁt values of Table 1 as solid dots. The open dots are values extended to other wavelengths for use in the HydroLight radiative transfer software. The corresponding quantum eﬃciencies are obtained by integration of over : 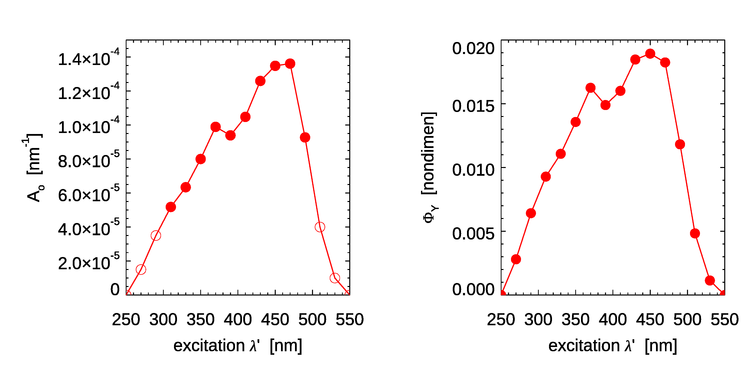 Figure 2: Left panel: Values of the ﬁtting parameter as determined for the measured data of Fig. 1 (solid dots) and as extended to other excitation wavelengths for use in HydroLight (open circles). Right panel: the corresponding CDOM quantum eﬃciency as obtained from Eqs. (3) and (4).

Figure 3 shows as computed by Eq. (3) for the parameter values of 1 as extended. 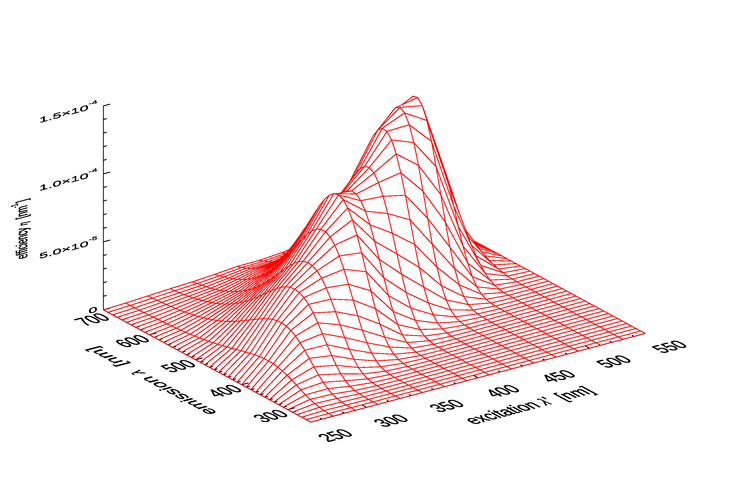 Figure 3: The spectral ﬂuorescence quantum eﬃciency function as computed by Eq. (3) using the parameter values of Table 1 (as extended for ).

As seen in Fig. 1 of the CDOM page and as modeled by Eq. (2), absorption by CDOM continues to rise rapidly in the ultraviolet (UV). As seen in Fig. 1, CDOM ﬂuorescence is excited by UV wavelengths even below 300 nm, and CDOM emission occurs at wavelengths from the excitation wavelength into the blue and green. Thus CDOM is optically important both because of its strong absorption at blue and UV wavelenghts, and because it can ﬂuoresce at UV to blue and green wavelengths.

As noted on the theory page, the CDOM ﬂuorescence wavelength redistribution function is obtained from via

The excellent Master’s Thesis by Hawes remains, three decades later, the one and only publication I can ﬁnd that presents measurements and a model for calibrated spectral ﬂuorescence quantum eﬃciency functions for CDOM (or for any other substance). His functional form (3) is used in HydroLight to model CDOM ﬂuorescence. The parameter values seen above are the defaults in HydroLight. Although the results of his thesis research were presented at the Ocean Optics XI conference (Hawes et al. (1992)), they were never published in the refereed literature. The thesis itself cannot be found online, but a photocopy can be downloaded on the references page.

As previously noted, ﬂuorescence emission is isotropic. Therefore the phase function is simply

The models seen above give everything needed to construct the volume inelastic scattering function of Eq. (1) for CDOM ﬂuoresecence, , which is then ready for use in the radiative transfer equation as seen in Eq. (2) of the theory page.

The HydroLight radiative transfer model has options to include or omit the inelastic scattering processes of Raman scatter by water and ﬂuorescence by chlorophyll and CDOM.

To see the eﬀect of the CDOM ﬂuorescence on the remote sensing reﬂectance , a series of HydroLight runs was done with the following inputs:

Figure 4 shows the results of these simulations. The top panel is for the Case 1 water with . The bottom panel is for the high-CDOM Case 2 water with . For the low-CDOM, Case 1 water, the simulation with CDOM ﬂuorescence increases by less than 2% over the elastic-only case. Raman scatter gives up to an 8% increase over elastic only. For the high-CDOM Case 2 water, Raman gives up to a 7% increase, but CDOM ﬂuorescence gives up to a 27% increase in . Thus, it is possible for CDOM ﬂuorescence to have a signiﬁcant eﬀect on , but it takes a very high CDOM concentration to do so. In low-to-medium CDOM waters, typical of the open ocean where CDOM covaries with chlorophyll, CDOM ﬂuorescence aﬀects by at most a few percent. If these spectra are used in band-ratio algorithms for retrieval of environmental variables such as the chlorophyll concentration, the CDOM-ﬂuorescence enhancement to should have even less aﬀect on the retrieved values. This conclusion is consistent with the ﬁndings in Hawes et al. 1992). Note also that CDOM ﬂuorescence has a minimal eﬀect in the chlorophyll-ﬂuorescence band near 685 nm. 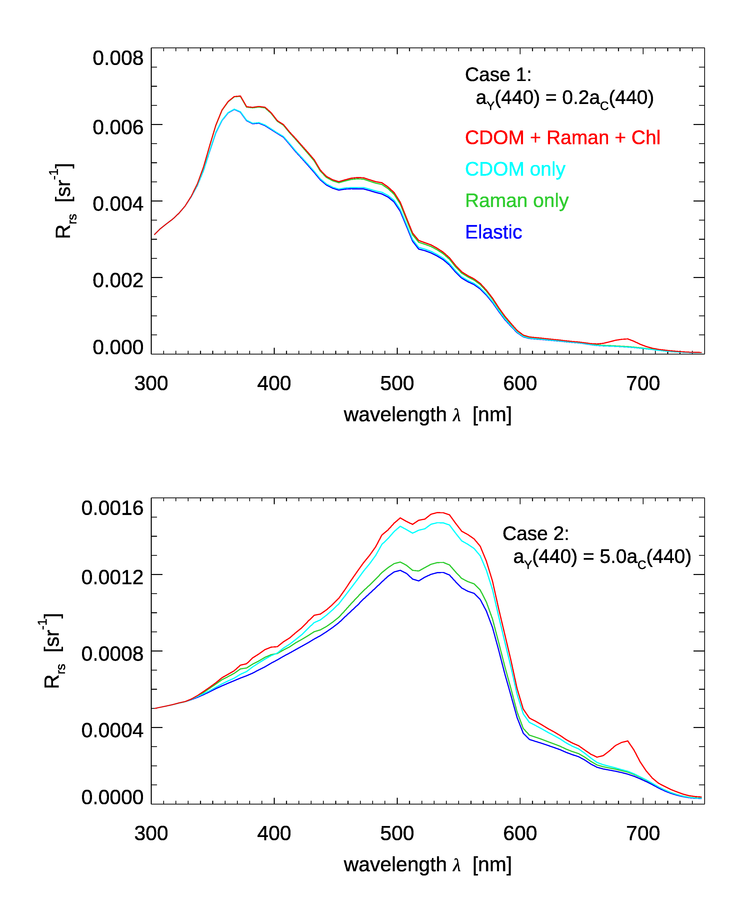 Figure 5 shows excitation-emission functions as commonly seen in the literature. Such measurements are used to identify the presence (or absence) of various types of ﬂuorescing compounds in the water. The original ﬁgure does not comment on the measurement units, which are often counts per second or something similar. In any case, these excitation-emission plots display relative values and are not the equivalent of the calibrated spectral ﬂuorescence quantum eﬃciency functions discussed above and seen in Figs. 1 and 3.

Figure 5: Two ﬂuorescence excitation-emission functions from diﬀerent source materials. Left, a peat soil leachate. Peaks A and C are the highest intensity, and represent high concentrations of humic acid, a primary organic component of soil. Right, a fresh plant leachate. Peaks T and B are the highest and represent high concentrations of fresh DOM compounds like proteins and lignins that ﬂuoresce in this region (Credit: Angela Hansen, U.S. Geological Survey. Public domain image from USGS.)