This page shows exactly how the calculations underlying the ﬁrst, third, and fourth ﬁgures of the previous page were performed. The devil is in the details, and these details are seldom (if ever!) discussed in the literature. Consider the case of , which will allow individual points to be plotted. Of course, with so few sample points, the variance spectrum is not adequately sampled and the resulting sea surface is unphysical because it has far too little variance. However, the algorithms are the same for any value of .

Consider ﬁrst the generation of the random sea surface with points. As discussed previously, the two-sided spectrum must be sampled at exactly spatial frequencies. The green dots in Fig. 1(b) show these points for the case of . The frequency values, written in math order, are

which for the choice of and gives

where . Here braces denote a set of frequencies labeled by values, and brackets denote an array of frequency values as shown. Note that the sampled frequencies are symmetric about , except for one “extra” point at index or frequency . This value is the Nyquist frequency, which in IDL is stored as the last element of the frequency array in math order. Sampling the spectrum at exactly this pattern of frequencies guarantees that the spectral amplitudes generated from them are Hermitian, which in turn guarantees that the generated sea surface is real. The red dots in Panel (c) of the ﬁgure show the 8 surface elevations generated for a particular sequence of random numbers. The values are at to for to . Fourier-generated surfaces are inherently periodic, so that . 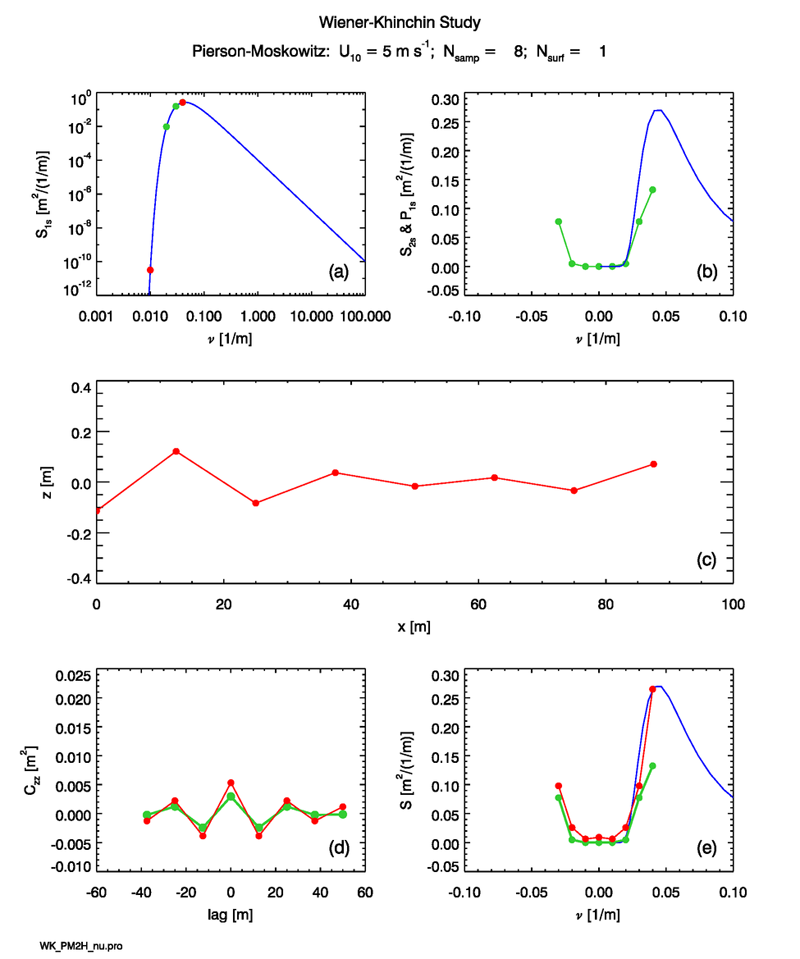 where now . The lags are symmetric about , except for one “extra” point at . This is analogous the one extra value in the frequency spectrum at the Nyquist frequency. Taking the forward DFT of these 8 autocovariance values as in Eqs. (10) and (11) on the Autocorrelation Functions: Theory page gives the green points plotted in Panel (e). These values are of course exactly the 8 points of the original spectrum, as shown by the green dots in Panel (b). This is just a check on the correct implementation of the round-trip calculation of inverse and forward Fourier transforms.

Now suppose that we wish to compute the autocovariance of the surface elevations, and from that obtain an estimate of the variance spectrum via the Wiener-Khinchin theorem. This provides a more stringent test of the calculations because of the intermediate sea surface in between the variance spectrum and the autocovariance. The crucial observation is that when calling the IDL autocovariance routine A_CORRLELATE, that routine must be given an array of the requested lag indices (lags in units of ) as seen in Eq. (3). Thus for an array of surfaces,

an array of lags

must be deﬁned. The call to the IDL routine is then

The IDL routine then returns an array of autocovariances at the lags shown in Eq. (3). These values are shown by the red dots in Fig. 1(d). This array returned by A_CORRLELATE has the same math order as the array. This array must next be shifted into the FFT order via the IDL shift function:

This array can now be given to the IDL FFT routine:

The resulting array is a complex 8-element array. The real part of is , with the frequencies in FFT order. The imaginary part is zero (to within a bit of roundoﬀ error; values are typically less than ). This array is shifted back to math order and divided by to get the array plotted as the red dots in Panel (e) of the ﬁgure:

It is always informative to take an “information count” of such operations. We started with a two-sided spectrum of 8 values. It is true that in the present time-independent simulations (except for the 0 and Nyquist frequencies, which are always special cases). However, this symmetry need not hold in general (and indeed is not the case when generating waves that propagate downwind, as explained previously). Thus these spectrum values represent 8 independent “pieces” of information in the form of 8 real numbers.

The 8 elevations of the sea surface are likewise 8 independent pieces of information.

Thus the sampled variance spectrum , the generated surface , and the surface autocovariance all contain the same amount of information, namely 8 real numbers. The various Fourier transforms and autocorrelation function show how to convert the information from one form to another.

It is certainly possible to sample in diﬀerent ways. For example, surface correlations can be computed for all lags from to , which gives total values. You can then take the FFT of that covariance and get a spectrum with values. However, I can guarantee you from two weeks of misery that the spectrum so obtained does not agree with the original spectrum. The extra points added by taking a greater range of correlations are in some way not independent of or consistent with the independent pieces of information tallied above. That is to say, the sea surface contains only pieces of information, and you cannot create more information simply by computing the autocovariance at more lag values. I vaguely remember reading somewhere that you should not compute autocovariances for lags greater than one-half of the data range. Note that the lag indices used above run from values of to , which indeed correspond to the to data range. I suspect, but have never seen stated, that there is something going on here that is analogous to sampling at greater than the Nyquist frequency—You can do it, but it messes up the results in ways that are not immediately obvious.

Another possible way to compute the autocovariance for a given sea surface is to compute only for 0 and positive lags out to a maximum possible lag of . This would again give independent numbers. Autocovariances are real and even functions of the lag (symmetric about ), which means that their Fourier transforms are also real and even. Since , a Fourier transform can be written as the sum of a cosine transform plus times a sine transform: . Here the cosine transform is deﬁned as in Eq. (1) of the Fourier Transforms page except that is replaced by ; the sine transfrom is deﬁned in the same way but with replacing . For an even function, the sine components in the Fourier transform will all be zero. Thus it seems that the Wiener-Khinchin theorem could be written as . An example of this was seen above in the analytical computation of the Horoshenkov variance spectrum. However, there are four diﬀerent algorithms for implementing the discrete cosine transform (DCT), which diﬀer by how the discrete, ﬁnite- sequence of points is assumed to be extended outside the domain for which is known. It seems that the present case of , which is symmetric about , corresponds to the “Type I” DCT discussed at https://en.wikipedia.org/wiki/Discrete_cosine_transform or the “” extension seen in Fig. 2(a) of Makhoul (1980). The four diﬀerent formulations of the DCT can be computed in four diﬀerent ways by use of FFTs. Thus the use of a DCT for the discrete Wiener-Khinchin theorem opens a new can of worms. In any case, there is little or no penalty to be paid for sticking with a Fourier transform evaluated by an FFT routine in order to evaluate the DFTs as needed here. As a matter of practical necessity, the internal consistency of the spectra, surfaces, and autocovariances seen in the preceding ﬁgures (and to be seen below) indicate that the sampling scheme described above is correct, even it there may be equivalent ones.

It is important to note that the size of the spatial region and the number of sample points must be chosen with care. As a rule, must be large enough to cover several wavelengths of the longest wave that contains a signiﬁcant amount of the total variance. must be large enough that the sampled points on the variance spectrum then reach far enough into the high-frequency end of the spectrum to cover the entire part of the spectrum that contributes a signiﬁcant amount to the total variance. To see the eﬀects of inadequate sampling, suppose we are concerned only with the short gravity and capillary waves, which are optically the most important because they have the highest slopes. If we are interested only in waves of wavelength down to , it might then seem reasonable to let and , which give . The shortest resolvable wavelength is then . Figure 2 shows an example surface and other quantities for this case. 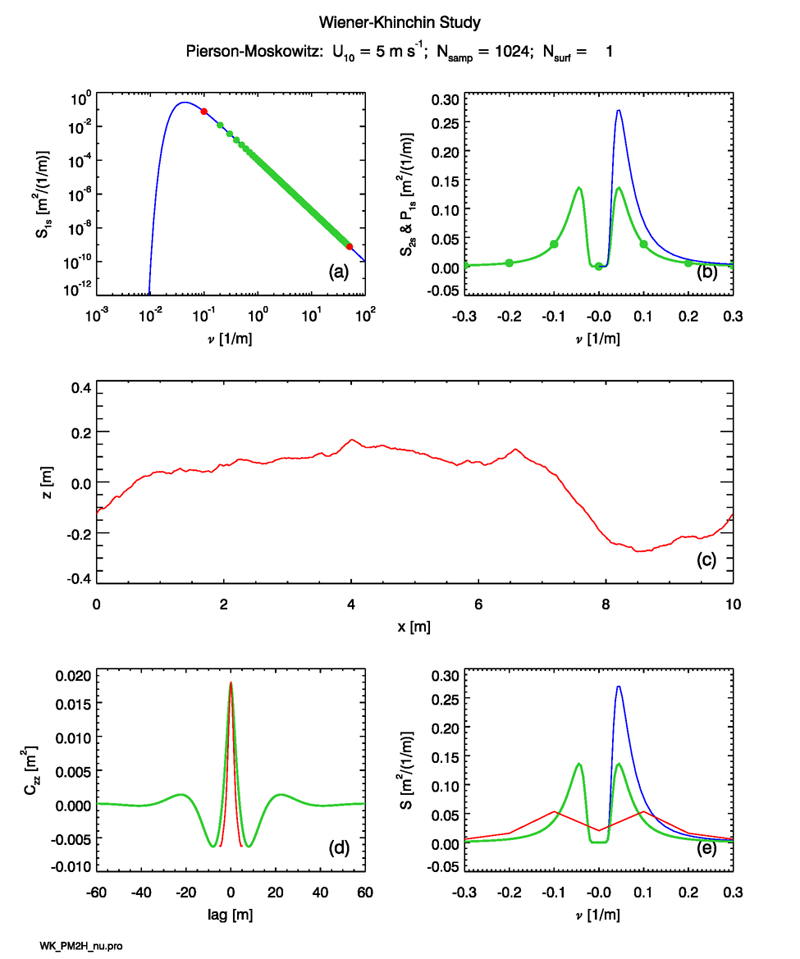 Figure 2: Example simulation with inadequate sampling of the variance spectrum.

Picking , as in the previous simulations, seems adequate for a wind speed of . This can be seen from the leftmost red point in Panel (a) of the previous plots, which is to the left of the spectrum maximum. However, then gives , and the last sampled point corresponds to a shortest resolvable wavelength of . If that is not adequate resolution for the problem at hand, there are two options. One option is to increase , which costs more computer time to evaluate the FFTs. The other option is to adjust the spectrum in some way to account for the missing variance while keeping relatively small. One technique for doing such a spectrum adjustment is described on the Numerical Resolution page.

Increasing by a factor of 8 to then gives , which might be adequate for the problem at hand. The time for an FFT is proportional to , so that increase in comes at a factor-of-ten increase in run time, which can be prohibitive if many surfaces must be generated. The other option is to account for the unsampled variance in some other way. One technique for doing that is to adjust the spectrum to account for the missing variance while keeping relatively small. One technique for doing this is described on the Numerical Resolution page.

These results can be summarized as follows:

Of course, the need for large and large comes as the cost of increased computer time. Experimentation is necessary to determine what values are required for a particular physical situation.