This pages illustrates the magnitudes of the various radiances in Eqs. (2) and (3) of the previous page with a speciﬁc example. The orbital characteristics of the proposed NASA HyspIRI (Hyperspectral Infrared Imager) satellite were used to obtain the Sun zenith and azimuthal angles at the time the sensor would ﬂy over a point at (latitude, longitude) = (28.75 N, 158.00 W) on June 21. This point is north of the island of Oahu in Hawaii and is known as Station ALOHA (A Long-term Oligotrophic Habitat Assessment). Figure 1 shows the relevant angles needed for the simulation. A coupled HydroLight-MODTRAN ocean-atmosphere radiative transfer code was used to compute the in-water and atmospheric radiances both just above the sea surface and at the top of the atmosphere. (HydroLight is an underwater radiative transfer code described at HydroLight and HydroLight web site. MODTRAN is an atmospheric code described at Acharya et al. (1998) and MODTRAN web site. Both are widely used for radiative transfer calculations in their respective geophysical domains.) That code can separate the Rayleigh vs. [aerosol + aerosol-Rayleigh] contributions, but cannot separate the pure aerosol from the aerosol-Rayleigh contributions. Like wise, it does not normally separate Sun glint and sky glint contributions, although that separation can be eﬀected with some extra eﬀort (explained below). The partitioning of atmospheric radiance contributions in the model simulations is not exactly the same as is done operationally, but the model simulations can still illustrate the various contributions to the TOA radiance. 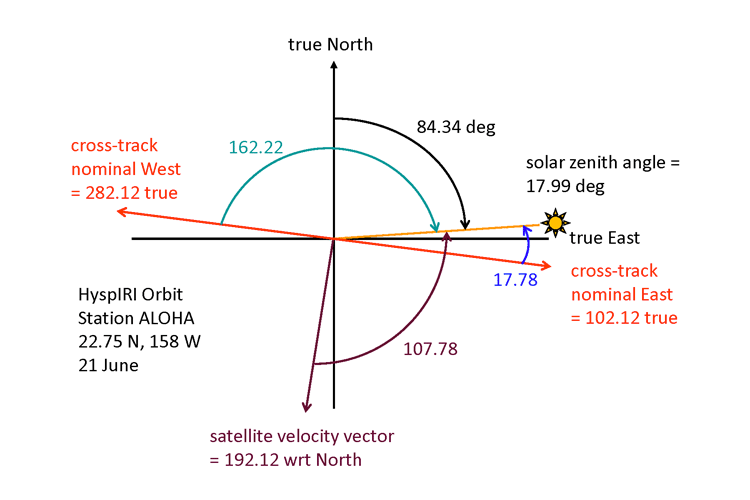 Figure 1: Sun and viewing geometry for a mid-day HyspIRI pass over Station ALOHA on 21 June.

A simulation was done for the following environmental conditions:

Figure 2 shows various radiances and irradiances obtained from this simulation. The solid curves are values at the TOA, and the dotted curves are the corresponding quantities just above the sea surface. The TOA curve (the solid purple line) is the extraterrestrial solar irradiance (averaged over 10 nm bands) on a surface parallel to the mean sea surface. The dips in the curve below 700 nm are due to absorption by various elements in the Sun’s photosphere; these are Fraunhofer lines averaged over the 10 nm bands of this simulation. Above 700 nm, the Sun’s irradiance is close to a blackbody spectrum (see Light from the Sun). The purple dotted line shows how much of the TOA solar irradiance reaches the sea surface. There are large dips in the TOA irradiance that reached the sea surface in the regions around 940 and 1130; these are due to absorption by water vapor, as are the smaller dips near 720 and 820 nm. The large opaque region between 1350 and 1450 nm is due to water vapor and carbon dioxide. The dip at 760 nm is due to absorption by atmospheric oxygen. These absorption features of the Earth’s atmosphere will aﬀect any radiation passing through the atmosphere. 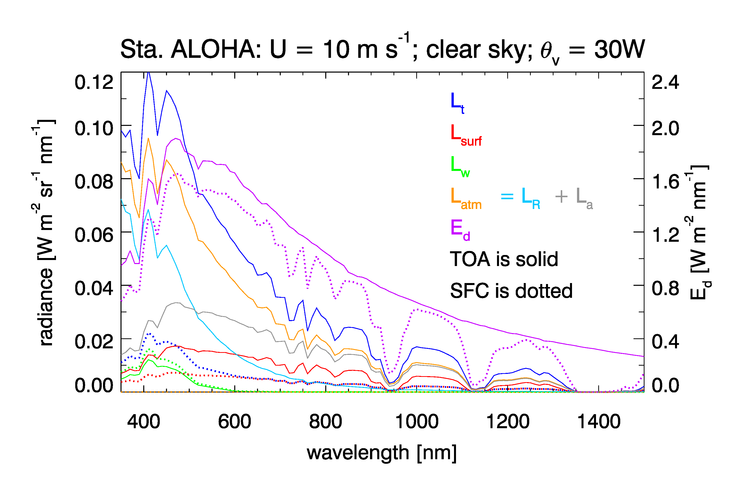 Figure 2: Example radiances contributing to the TOA radiance. Solid lines are radiances at the TOA; dotted lines are at the sea surface (SFC). The geometric, atmospheric, and water conditions are described in the text.

The red curves show the total radiances due to surface reﬂectance, i.e., the sum of the background sky reﬂectance and the direct Sun glint. However, the red curves show that the surface-reﬂectance contribution is greater at the TOA than at the surface. This seems counterintuitive and requires explanation. In Fig. ?? the arrow labeled represents Sun glint due to the occasional wave facet that is tilted in just the right direction to create glint that is seen by the sensor. The arrow labeled represents the very bright glint in the Sun’s specular direction; the sensor is looking in the direction away from the Sun’s azimuthal direction in order to avoid viewing this specular glint. However, the specular glint gives a strong reﬂected radiance, some of which is being scattered by the atmosphere into the sensor viewing direction; this is illustrated by the arrow in Fig. ??. The surface contribution in Fig. 2 is the sum of the , , and contributions. If the ocean is viewed from just above the sea surface (the red dotted line), the surface-reﬂected radiance comes only from reﬂected sky radiance and a small amount of direct Sun glint from wave facets that are tilted in just the right way to reﬂect the Sun’s direct beam into the direction of the sensor. (This direct Sun glint is minimal because of the choice of viewing direction.) These surface-reﬂected sky and Sun radiances decrease between the surface and the TOA, just as does the water-leaving radiance. However, the total TOA radiance that arises from sea surface reﬂectance, as partitioned in the simulation, comes from the sum of the surface reﬂectance in the viewing direction (decreasing with altitude) and the contribution by atmospheric scattering of specular Sun glint into the viewing direction (, increasing with altitude). The specular radiance is large in magnitude, so the atmospheric scattering of this radiance into the viewing direction can be signiﬁcant. If the present simulation is run with a level sea surface, for which there is no Sun glint into the sensor direction, this behavior is still present and, indeed, is even somewhat greater in magnitude. (To fully isolate the eﬀect of specular Sun glint being atmospherically scattered into the sensor, a special run was made in which any photon from the Sun’s unscattered beam that was reﬂected by the sea surface was killed. That is, all Sun glint was forced to be zero. Only photons from the background sky that were reﬂected by the sea surface were allowed to contribute to the TOA surface-reﬂected radiance. In that case, the surface-reﬂected radiance behaves the same as the water-leaving radiance: less sky glint reaches the TOA than leaves the sea surface.)

Figure 3 shows the fractional contributions by these various processes to the total TOA radiance . For this particular case, the water-leaving radiance is at most 10% of the total TOA radiance. The atmospheric path radiance contributes 70 to 90% of , with the rest coming from surface glint. Below 500 nm, Rayleigh scattering by atmospheric gases is the largest contributor to the TOA radiance. This is also true in the band from 1350 to 1400 nm, where the atmosphere is essentially opaque, because the aerosols are located mostly near the sea surface. Aerosols are the greatest contributor between 500 and 1350 nm. 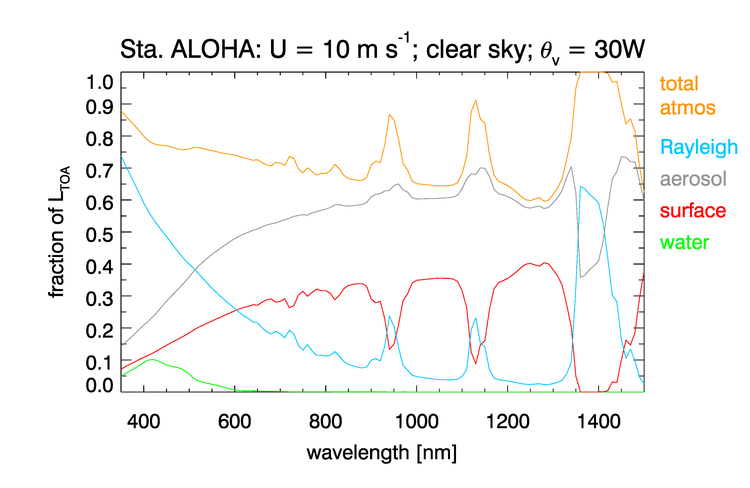 Figure 3: The fraction of due to various processes, for the particular simulation of Fig. 2. (Need to add a curve for total atmos plus glint.)

Figure 4 shows the of Fig. 2, plus the corresponding radiances for wind speeds of 0 and , clear and hazy atmospheric conditions, and viewing directions of 0 (nadir) and 30 deg East or West of the ﬂight direction. Each of these much-diﬀerent TOA radiances has essentially the same water-leaving radiance , which is shown in green. The atmospheric correction problem can be visually summarized as follows: Given any of these TOA spectra and the geometry (Sun location and viewing direction), recover the water-leaving radiance specrum . This is clearly a diﬃcult problem because the needed atmospheric conditions (aerosol type and concentration in particular) are not obtained as part of the measurement. 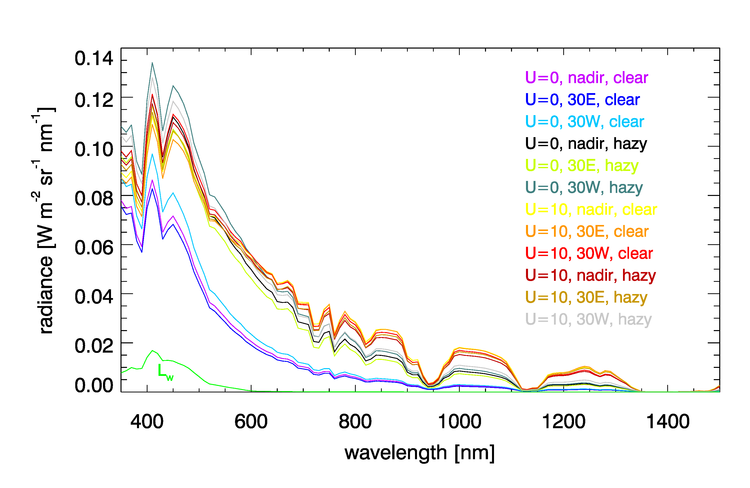 Figure 4: Upper curves: TOA radiances for various environmental and viewing conditions as labeled. Each TOA radiance has the same water-leaving radiance , which is shown by the green curve.