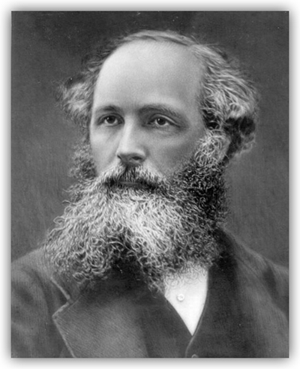 This page begins a qualitative overview of Maxwell’s equations. Entire books have been written about these equations, so two pages are not going to teach you much. The goal here is to present the fundamental ideas and, hopefully, inspire you to continue to study these equations in the references provided. The discussion presumes a knowledge of basic physics (concepts such as electric charge and current, and electric and magnetic ﬁelds). Knowledge of vector calculus (divergence and curl in particular) is needed to understand the equations, but you can understand the basic ideas even without the math. If you are unfamiliar with the basic physics and math of electric and magnetic ﬁelds, or need a good review, an excellent place to start is A Student’s Guide to Maxwell’s Equations by Fleisch (2008). That tutorial spends 130 pages covering what is presented here.

Recall the Lorentz equation for the force exerted on an electric charge moving with velocity through an electric ﬁeld and a magnetic ﬁled (in SI units):

In this discussion, vectors in 3D space are indicated by bold-faced symbols. The indicates the vector cross product. The Lorentz equation gives us the units for electric and magnetic ﬁelds. The force on the charge due to the electric ﬁled is , so the units of electric ﬁeld must be

where denotes ”units of ...”. Similarly, magnetic ﬁelds have units of

You will see equivalent forms for these units. A newton per coulomb is the same as a volt per meter. An ampere is a current of a coulomb per second, so we can write , which is called a Tesla (T). Table 1 summaries for reference the quantities seen in Maxwell’s equations.

The ﬁrst two quantities in Table 1 are worthy of comment. The electric constant or permittivity of free space, , is an empirical constant that measures an electric ﬁeld’s ability to “penetrate” a vacuum. In other words, it sets the strength of the force between two electric charges separated by some distance in a vacuum. This is seen if you write Coulomb’s law as

where is the magnitude of the force (in newtons) between charges and (in coulombs) separated by a distance (in meters) in a vacuum. The value of is not derived from fundamental physics; it must be measured. This can be done by measuring the force between two charges, but is more accurately measured with a parallel plate capacitor. Similarly, the magnetic constant or permeability of free space, , measures a magnetic ﬁeld’s ability to penetrate a vacuum. It sets the strength of the magnetic force between two current-carrying wires separated by some distance in a vacuum. It also must be measured. Why do these two fundamental constants have the particular values shown in Table 1? This is a question like “why does an electron have the charge it has, and not some other value?” All that can be said is that these values are what they are because that is just how the universe works.

By the way, an electric ﬁeld of 1 V/m is a very weak ﬁeld: just think of a large parallel plate capacitor with the plates separated by 1 m and connected by a 1 V battery. The electric ﬁeld between a thundercloud and the ground is of order just before a lightning discharge. On the other hand, a 1 T magnetic ﬁeld is really strong. The Earth’s magnetic ﬁeld at the surface is about . Important research has shown that a 16 T magnetic ﬁeld is so strong that it can overcome the force of gravity and levitate a living frog (Berry and Geim, 1997. Eur. J. Phys 18, 307-313).

Table 1: Quantities involved in Maxwell’s equations. Other than the physical constants and , all quantities are functions of time and space, e.g., .

Without further ado, Maxwell’s equations for the electric ﬁeld and magnetic ﬁeld in a vacuum are (in diﬀerential form, in SI units)

(If you are not familiar with the divergence and the curl of a vector ﬁeld , these are combinations of the spatial derivatives of the components of . They are deﬁned in the box below .) Note that “in a vacuum” means that the electric and magnetic ﬁelds are in empty space. There can still be electric charges located here and there in space (the term), and the same for currents (), which give rise to the ﬁelds in the region of interest.

These equations can be described as follows: 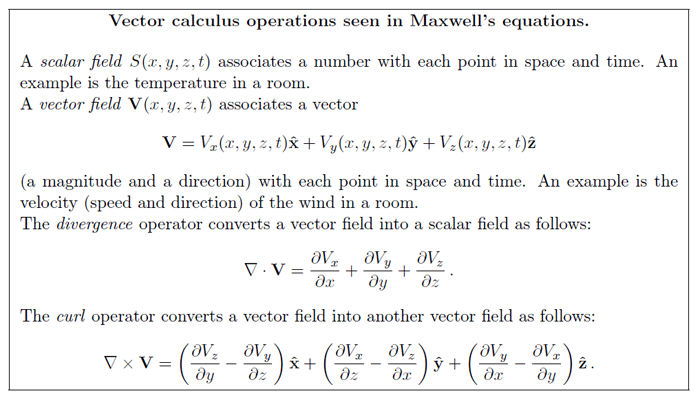 Simply stating Maxwell’s equations is really no diﬀerent than simply stating Newton’s law of gravity for the magnitude of the force of attraction between two spherical masses and separated by a distance :

Newton did not derive his law of gravity from more fundamental principles; it is the fundamental principle. Newton found that if he assumed Eq. (5) to be true, then he could derive Kepler’s laws of planetary motion, the motion of the moon, and (to ﬁrst order) the ocean tides. The same can be said of Maxwell’s equations. They are based on decades of observational work by Coulomb, Gauss, Faraday, Ampere and others, but we can view them as the mathematical statement of the fundamental laws governing electric and magnetic ﬁelds. We can simply accept these equations as given and get on with the business of applying them to problems of interest. (Of course, “fundamental laws of nature” may turn out of be imperfect in the light of new data. That happened to Newton’s law of gravity, which was replaced by, and can be derived from, Einstein’s theory of general relativity. Likewise, Maxwell’s equations can now be derived from the more fundamental laws of quantum electrodynamics developed by Feynman and others.)

It may at ﬁrst glance seem that Maxwell’s equations are over-determined. That is, there are four equations but only two unknowns, and . This would be true for algebraic equations, in which case we could solve two linearly independent equations for two unknowns. However, for vector ﬁelds, Helmholtz’s theorem (also known as “the fundamental theorem of vector calculus”) says that an arbitrary vector ﬁeld in 3 dimensions can be uniquely decomposed into a divergence part (with zero curl) and a curl part (with zero divergence) (under a few conditions, namely vector functions that are suﬃciently smooth and that decay to zero at inﬁnity). Conversely, knowing the divergence and curl of a vector ﬁeld determines the vector ﬁeld. That is the case here for both and . Given the charge density and current density , the four Maxwell equations uniquely determine the electric and magnetic ﬁelds via their divergences and curls. (To be rigorous, a vector ﬁeld is determined from its divergence and curl to within an additive term. This is somewhat like saying that knowing a derivative determines to within an additive constant. Adding a boundary condition then ﬁxes the value of the constant.)

Light as an Electromagnetic Phenomenon

Starting with equations (1) to (4), Maxwell derived what is probably the most elegant and important result in the history of physics. Consider a region of space where there are no charges () or currents (). Equations (1)-(4) then become

The same process starting with the curl of Eq. (9) gives an equation of the same form for . Equations of the form

describe a wave propagating with speed . Thus each component of and satisﬁes a wave equation with a speed of propagation

Inserting the experimentally determined values of and given in Table 1 gives . As Maxwell observed (in A Dynamical Theory of the Electromagnetic Field, 1864, §20), “This velocity is so nearly that of light that it seems we have strong reason to conclude that light itself (including radiant heat and other radiations) is an electromagnetic disturbance in the form of waves propagated through the electromagnetic ﬁeld according to electromagnetic laws.” This conclusion is one of the greatest intellectual achievements of all time: not only were electric and magnetic ﬁelds tied together in Maxwell’s equations, but light itself was shown to be an electromagnetic phenomenon. This is the ﬁrst example of a “uniﬁed ﬁeld theory,” in which seeming independent phenomena—here electric ﬁelds, magnetic ﬁelds, and light—were shown to related and governed by the same underlying equations.

Comments for Maxwell's Equations in Vacuo: