These statements imply that the directional and depth dependencies of the radiance distribution decouple at great depths. That is to say,

This in turn implies that all irradiances decay in the asymptotic regime at the same rate as the radiance. For example,

Note that any normalization factor in divides out when computing AOPs.

Because the asymptotic radiance is determined solely by the IOPs, it follows that any quantity computed from is also in IOP. Therefore all apparent optical properties become inherent optical properties in the asymptotic regime. The K’s, ’s, R’s, and their ilk, which are inﬂuenced by boundary conditions near the water surface, all approach values at depth that are independent of the boundary conditions.

An integral equation for the asymptotic radiance

The obvious question is, ”How do you computed the asymptotic radiance distribution and the asymptotic decay rate, given the IOPs?” One way is to recall the RTE for homogeneous, source-free water

and assume that the radiance has the form seen in Eq. (1). This gives an integral equation for the shape and decay rate of the asymptotic radiance distribution:

(Note that since the scattering angle depends only on , we can set in this equation, so that the result is a function only of .) This equation is often written in terms of and a nondimensional asymptotic decay rate as

Given the IOPs c and for Eq. (2) or and for Eq. (3), we can solve either of these equations for the corresponding and or . Another form of Eq. (3), often seen in the literature, is

where is the azimuthally averaged phase function

For the idealized case of isotropic scattering, and the solution of Eq. (3) has the simple form

where is normalized to 1 at (or at the nadir direction ). This has the shape of an ellipse whose major axis is oriented vertically. The corresponding value of is the solution of the transcendental equation

Kattawar and Plass (1976) obtained an analytic solution of Eq. (3) for the Rayleigh phase function . However, for other phase functions, in particular for those characteristic of oceanic waters, the solution of Eq. (2) or (3) must be obtained numerically. Solving the integral Eq. (2) is mathematically equivalent to solving a certain eigenmatrix equation for its eigenfunctions (which give ) and eigenvectors (which give ). The eigenmatrix approach is described in Light and Water (1994) section 9.6. (HydroLight uses the eigenmatrix approach to obtain its asymptotic values. The excellent agreement between the asymptotic values computed by the eigenmatrix method and the approach with depth to those values, as obtained by independent numerical solution of the RTE, is an excellent check on the correctness of the HydroLight code.) 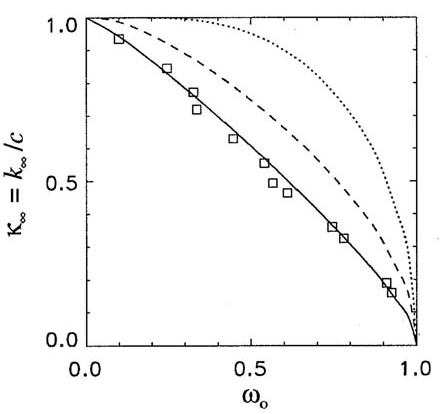 Figure 2 shows the shape of as a function of for the average-particle phase function . Since it is the shape that is determined by the IOPs, it is customary to normalize to one for the nadir radiance direction (looking upward in the zenith direction). The viewing angle as plotted is the angle in which an underwater observer would look in order to see photons traveling in direction ; and are both measured from the , or nadir, direction. Thus, corresponds to looking toward the zenith and seeing photons heading straight down (). As we would expect, in highly scattering water (large ) the upwelling radiance is relatively much greater than in weakly scattering water (small ). Corresponding curves for the Rayleigh phase function can be seen in Kattawar and Plass (1976). Prieur and Morel (1971) show such curves as a function of the relative contributions by molecular and particle scattering, i.e., for phase functions that are in between and . 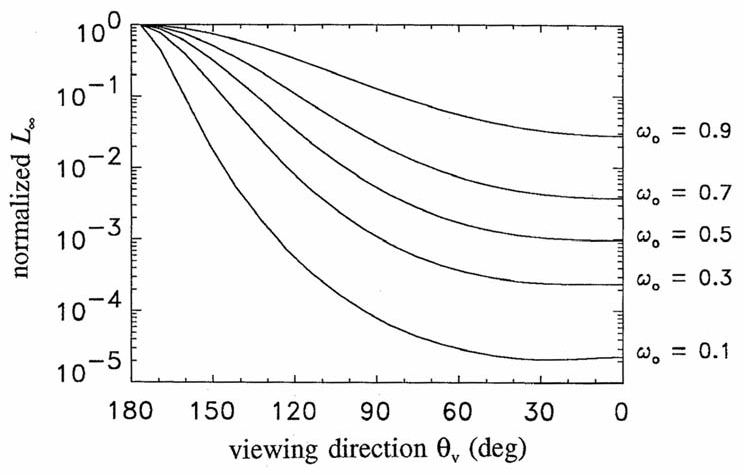 Figure 2: Fig. 2. Shape of the asymptotic radiance distribution as a function of , for the particle phase function . The viewing angle is , as discussed in the text. 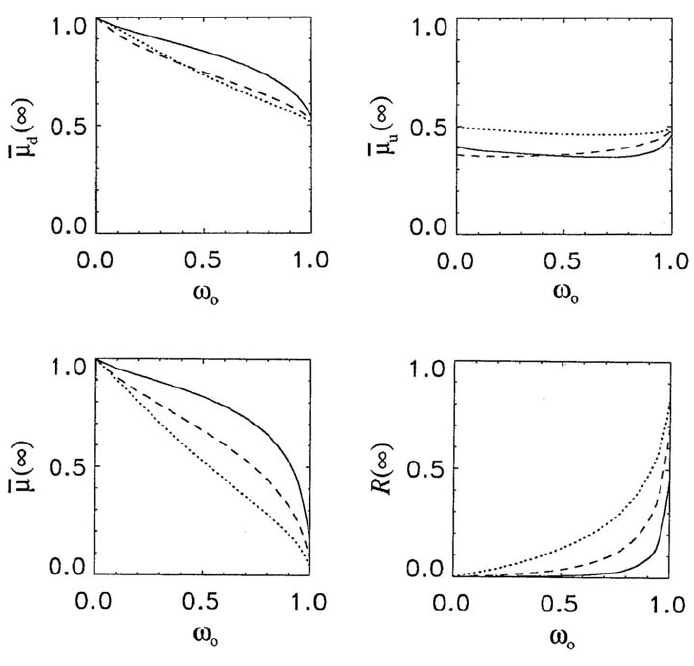 Figure 3: Fig. 3. Asymptotic values of the mean cosines and of the irradiance reﬂectance, as a function of , for various phase functions. The solid, dashed, and dotted lines correspond to those of Fig. 1.

Rate of approach to asymptotic values

The asymptotic values are determined solely by the IOPs of a homogeneous water body. However, how quickly a given quantity approaches its asymptotic value depends both on the IOPs and on the boundary conditions. We have already seen this in the discussion of K functions, but a few more examples will be instructive. HydroLight was run for Case 1 water with a chlorophyll concentration of . The wavelength was 443 nm. The corresponding IOPs (including water) were , , so that . Thus one meter of geometric depth is about 0.5 optical depths. The albedo of single scattering is then , and the total backscatter fraction was 0.1253. Figure 4 shows at 443 nm for four diﬀerent surface boundary conditions:

The curves of Fig. 4 show the boundary eﬀects on the rate of approach to the asymptotic value of , which depends only on the IOPs. The curve for the heavily overcast sky approaches the quickest. The physical reason is that the overcast sky radiance is already a diﬀuse radiance distribution, so that less scattering (i.e., less propagation to depth) is required to redirect the initial photon directions towards the asymptotic angular distribution within the water. The other cases with the sun in a clear sky have a strongly collimated incident radiance distribution, which requires more scattering (a deeper depth) to ”erase the memory” of where the sun is in the sky and achieve the asymptotic shape of . For the 50 deg sun angle, the surface roughness makes a noticeable but minor diﬀerence. 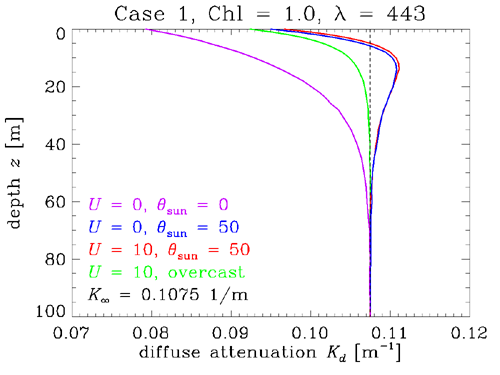 Figure 4: Fig. 4. Approach of to for one set of IOPs and diﬀerent sea-surface boundary conditions, as described in the text.

Figure 5 shows the corresponding results for the approach of the irradiance reﬂectance to its asymptotic value of . 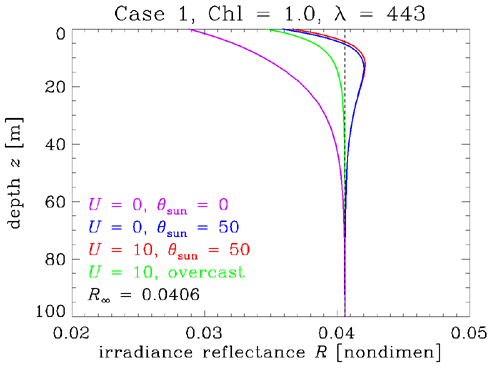 Figure 5: Fig. 5. Approach of to for one set of IOPs and diﬀerent sea-surface boundary conditions, as described in the text. The color-coded curves correspond to those of Fig. 4. 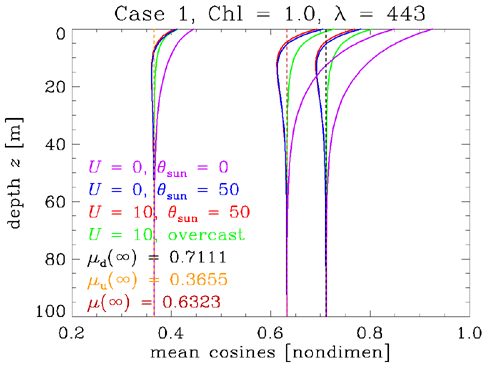 Figure 6: Fig. 6. Approach of the mean cosines , , and to their respective asymptotic values. The color-coded curves correspond to those of Fig. 4.

Finally, Fig. 7 shows the approach of measured and modeled radiances to the asymptotic shape. The dots are radiances measured in the azimuthal plane of the sun by Tyler (1960) at the depths indicated. The blue curves are the corresponding HydroLight simulation. The measured data were published only as relative values. Therefore, the radiances are normalized for plotting to a value of 1 in the nadir-viewing direction () at depth 4.2 m. The direction is looking toward the sun, and is looking away from the sun. The red curve shows the shape of , normalized to the nadir-viewing measured value at 66.1 m. The data are described in detail in Tyler’s report, and the modeling is described in Light and Water (1994) section 11.1. Given the uncertainties in the measured data and the educated guesses that had to be made about unmeasured inputs needed by HydroLight, the overall agreement between data and model predictions is quite good.

Near the surface, the sun’s location is obvious and the unscattered direct beam gives a large spike in the radiance. At 29.0 m, the sun’s azimuthal direction can still be discerned, but the large spike of the direct beam has been removed by scattering. By 66.1 m, there is only a slight asymmetry remaining to indicate the sun’s azimuthal direction. Clearly, both the measured and modeled radiances are close to the asymptotic shape at 66.1 m, which was about 26 optical depths. 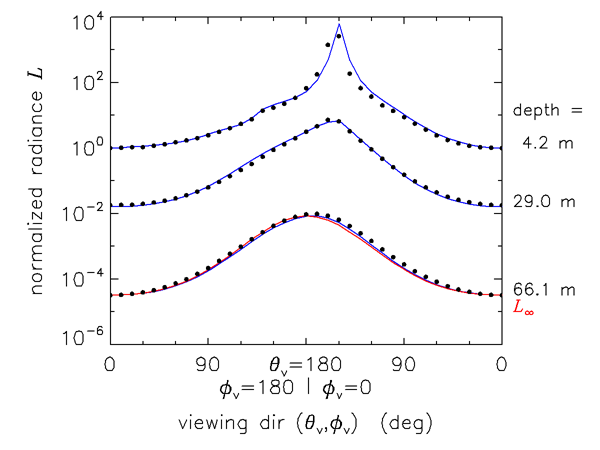 Comments for The Asymptotic Radiance Distribution: